Brett Brown has had plenty of hands-on experience working with and charting the developmental path for promising, young players, between the 12 years he spent in San Antonio – where he helped the Spurs go on a dynastic run – and now his time here in Philadelphia.

As the head coach prepares for his fifth season with the 76ers, he does so with arguably the clearest, stable sense yet of which blue chippers the team is counting on to form the core of a sustained winner.

The anchor, of course, figures to be Joel Embiid, who, in his highly-anticipated debut season, displayed franchise player potential in the 31 games he played.

Ben Simmons, during a summer filled with 5-on-5 pickup, seems to have reaffirmed to those watching him that the transformative promise he showed at last year’s summer league, and in one season at LSU, was indeed legitimate.

Just a few short months ago, in June, a third key pillar was added to the mix, in Markelle Fultz. The University of Washington product became the Sixers’ second No. 1 pick in as many years, and fourth in franchise history.

While Fultz’s professional relationship with Brown has, to-date, been briefer than the ones Brown shares with Embiid, picked third in 2014, and Simmons, who went first in 2016, Fultz has already given his new mentor a good idea of what to expect from him in his first campaign.

Sure, there’s the already-graceful flow of Fultz’s offensive game. But more encouraging than that, at least to Brown, is that the combo guard appears to be accessible, open-minded, and willing to accept and process feedback.

“The first thing that most quickly comes to my mind is the human being,” said Brown Wednesday at his annual pre-training camp luncheon. “There is a humility and sort of a kindness in Markelle Fultz that’s not like all full of bravado and swagger. He plays like that, but the person has been the thing that’s stood out to me the most.”

Forget, for a moment, Fultz’s All-America freshman season (not necessarily easy to do; he led the Pac-12 and ranked 6th in the NCAA with 23.2 points per game), and let’s simply revisit the D.C. area native’s summer league. His mild-mannered, go-with-the-flow, respectful attitude that Brown alluded to belied an aggression on the court.

Unafraid was Fultz, for instance, to spin into the teeth of a defense…

…or confidently rise up for a hesi pull-up jimbo.

Scoring in July came in high volume for Fultz, as it did in his lone year in college. He had 17 points in his Utah Jazz Summer League debut against Boston, then followed that effort up with a 23-point outing two days later versus the Jazz. Once in Las Vegas, Fultz posted eight points in 15 minutes in a game against Golden State.

“There’s a fluid side of how he plays that, at times, can give the misperception that he doesn’t play hard enough.”

Which, Brown added, isn’t uncommon among many players in the NBA. Specifically, he thinks Fultz can be dynamic in open-court, floor-running, “jailbreak” type opportunities, and plans to put the ball in Fultz’s hands in those situations.

While Fultz looked smooth putting the ball in the basket during summer league, he never appeared to be fulfilled by using points as a measure of personal performance. Typically, when asked about his high-scoring games, he would say something like, “I need to work on all the things I need to work on.”

The Sixers then and now feel Fultz’s desire to improve is real.

“He’s really going to be easy to coach,” Brown said Wednesday. “He’s going to let me coach him.”

And where could Fultz use the most fine-tuning as a rookie? Defense, Brown says, and it’s a project the Sixers intend to approach head-on.

“Everybody in this room,” Brown said during the luncheon, “Markelle the same, understands that we’re going to coach him hard defensively. There’s always a question of how do you play that side of the ball.”

In his final media availability of the summer, Fultz, who himself has repeatedly acknowledged his need to grow defensively, sounded pleased about the reps he got on that side of the floor. He said, “I learned a lot, just how to guard screens, how to get in my man, and just knowing that everybody on this level is going to be faster and quicker, and going to be able to play.”

(Above, Fultz, in his first summer league game, stays with his man, Demetrius Jackson, by going over Jaylen Brown. Fultz’s reward for his hustle is the first of three blocks he registered this summer.)

Spitballing a bit Wednesday about possible early-season rotations, Brown indicated that when Simmons and another guard – JJ Redick, for example – are in the same line-up, Fultz might be summoned to defend opposing point guards. Should this assignment come to fruition, that means Fultz could face the likes of John Wall, Kyrie Irving, Kyle Lowry, and Chris Paul and / or James Harden (twice!) within the first two weeks of his career.

The challenge of covering NBA point guards is real for Fultz, Brown said.

“I feel like the city, and the media, have to recognize that he just turned 19 a few months ago. We all get how unforgiving the NBA is. There are weakness obviously that we have to address in his game, and we really want to go hard at his defense.”

In addition to honing in on defense, the Sixers have asked Fultz to put “NBA weight” on a 6-foot-4 body that last season in college was listed at 190 pound.

“We really addressed his core, his glutes, where he could get strong sort of through his midsection, and be able to navigate an NBA court better in that regard,” said Brown. “We just want to dictate where the frame goes, and he really has a frame.”

Most staggering of all to Brown is Fultz’s sizable wingspan. The other day, while taking team pictures at the Sixers’ training complex, Brown kidded Fultz about his length, even striking a pose to make a point. 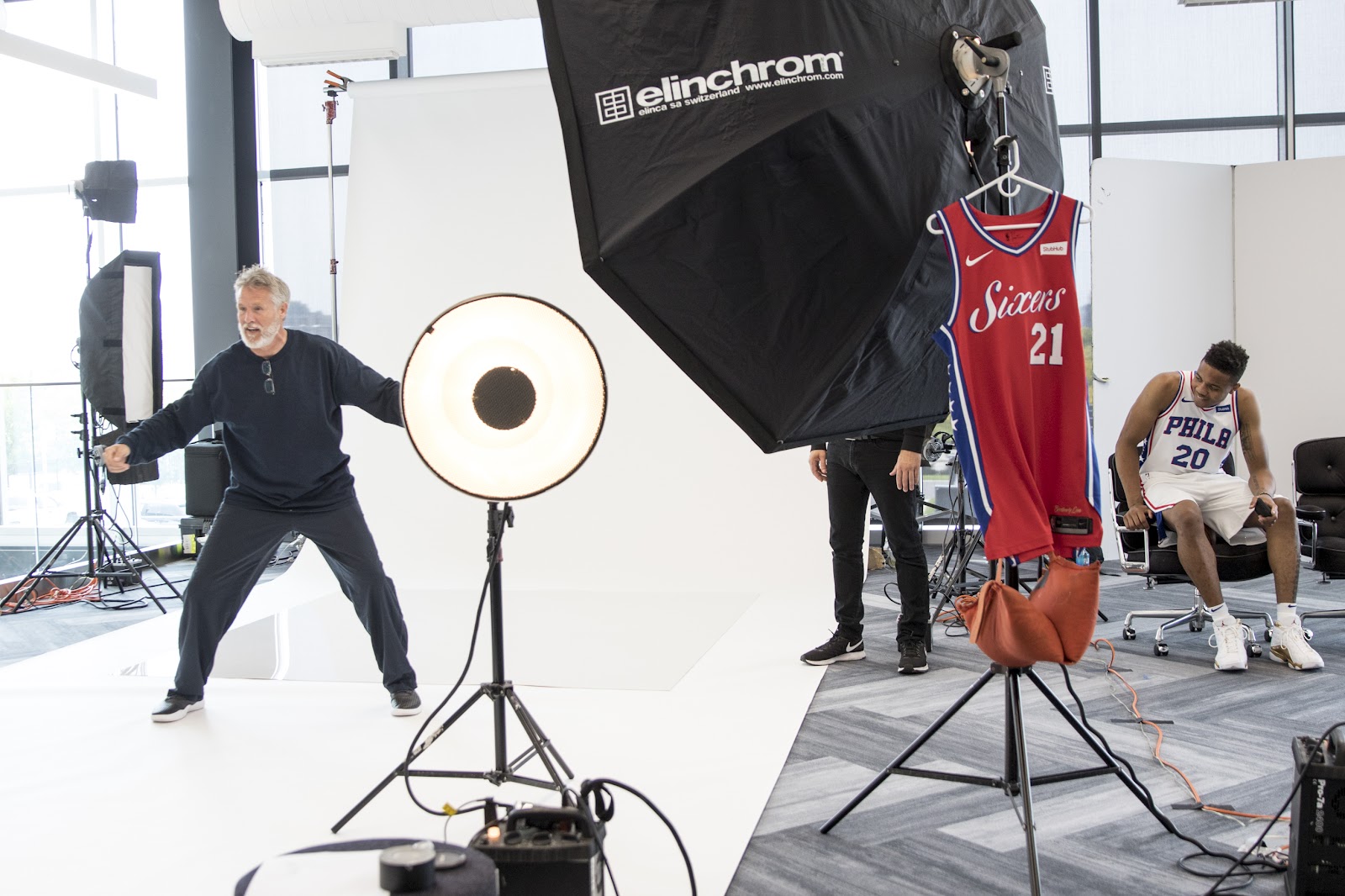 (Fultz, seated to the right in his white jersey, laughs as Brown mimics Fultz’s wingspan.)

“It was me baiting Markelle,” Brown said of the photo.

He told Fultz, “‘Look at what you can be.’ He just uncoils.”

Between Fultz’s wingspan, “athlete’s ankles” (Brown’s term), and with some extra muscle in his chest and lats, Brown sees a special specimen on the Sixers’ hands.

Skilled, coachable, and physically gifted. Not a bad trifecta for Fultz to bring to the table entering his first season, and it’s a package Brown and the Sixers clearly believe in.

Check back over the next couple of days for new installments to our ‘Unpacking for Camp’ series.