The transgender-rights supporters expected the bus to arrive sometime Saturday but didn’t know what time it was going to show up. Backed by conservative groups, the bus had been touring East Coast cities for the past couple of weeks.

In anticipation of the bus, the city’s Office of LGBT Affairs and other groups organized a “Pop-Up Love Party” on the north apron of City Hall from 11 a.m. to noon, during which supporters of the transgender community spoke, around 100 people gathered in support, and a light-blue-pink-and-white-striped transgender-pride flag was hoisted up on a flagpole at the end of the event. The flag will remain there for the weekend.

Moments after the speakers finished, the bus turned the corner and appeared.

“There it is!” one person shouted. Swarms of people then ran toward the bus. A person banged on a drum. Eggs were thrown, hitting the bus. At least two smoke bombs were set off. 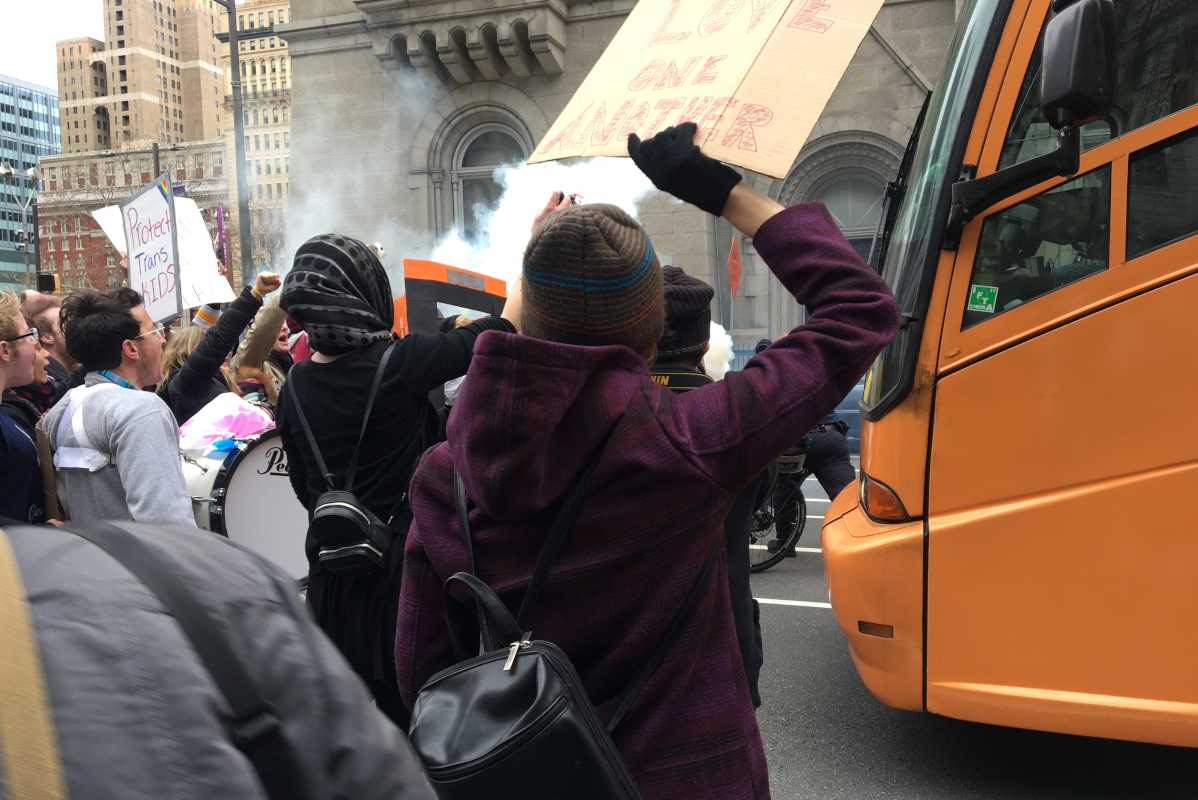 Philadelphia police officers on bike and foot stood around the bus, acting as a barrier and keeping the peace. One person, dressed all in black with a partial-face mask, was handcuffed and taken to the sidewalk. A police captain later said that person was arrested for disorderly conduct.

Sharron Cooks, 39, chairwoman of the mayor’s Commission on LGBT Affairs, who had spoken at the rally, told protesters gathered in front of the bus to “back up” as she waved them away from the street.

With police guidance, the bus then slowly turned north onto Broad Street. After the crowd moved away from it and it headed away from City Hall, one woman yelled: “Get the … out of this city!”

About 15 minutes after the bus appeared, it had left the area, turning right onto Race Street. Police Capt. Frank Palumbo said he had gone onto the bus and talked to the driver. “I asked him if his intention was to leave,” Palumbo said. “He said it was.”


Palumbo said he had told the driver how to get onto the Vine Street Expressway.

Transgender supporters chant “Our streets!” after bus heads north on Broad, away from City Hall. pic.twitter.com/l75BquYwDJ

Joseph Grabowski, spokesman for the National Organization for Marriage, said by phone afterward that he, another person, and the driver had been on the bus. They hadn’t planned on getting out of the bus or stopping at City Hall, but had planned to drive around City Hall, then to the Philadelphia Museum of Art.

“The goal of the bus is to raise the profile of the issue of transgender policies and to renew the debate on transgender policies, the so-called bathroom bills, to make sure both views on that debate get a hearing,” he said. “But unfortunately, as we made our way around [City Hall], we were stopped.”

His group is against someone who is male but identifies as female going into women’s bathrooms, for instance, he said.

He said for the safety of everyone concerned — those on the bus, the protesters, and the police — his group agreed to leave the city.

Grabowski, speaking about 2:30 p.m. Saturday, said the bus was no longer in Philadelphia, but did not want to disclose its location for security reasons.

He said he learned from the bus driver that two windows of the bus were cracked from objects hitting it while it was on the north side of City Hall.

The members and supporters of the transgender community had planned to “peacefully counteract the anti-trans ‘FreeSpeechBusTour’ scheduled stop in Philly,” according to an event page on Facebook.

Cooks, the first transgender person to chair a city commission, said after the bus left and people eventually dispersed from the scene that whoever threw the smoke bombs and the eggs were not part of the group that organized the City Hall rally that was to promote love, peace and acceptance. She believed they were “anarchists” who joined the crowd.

“We don’t want the incident that occurred with the smoke bombs and the eggs to reflect on our event,” she said.

The positive outcome — that the bus drove away — really showed “there was a lot of support in the City of Philadelphia for our transgender community,” she said.

Mike Hisey, 54, of Philadelphia, who was at the rally in support of the transgender community, was dressed, in parody, as a Catholic nun with a makeshift orange bus costume. 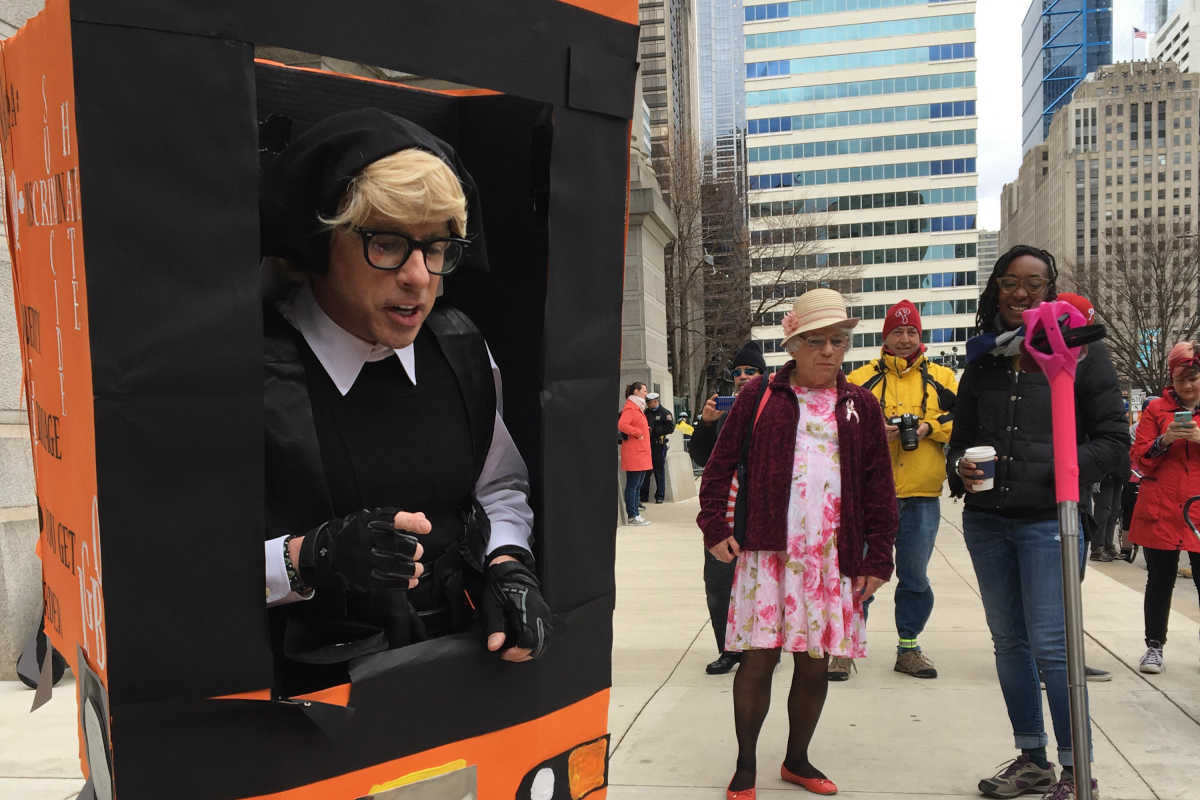 “I’m gay, I’m gender fluid,” said Hisey, who said he was born male but doesn’t identify specifically with one gender or the other and doesn’t think it matters.

One message on his bus costume read: “Attack and you get suicide murder.”

“They [the people supporting the bus] are saying trans people do not exist,” said Hisey. “When they say that, that gives bullies the license to bully.”

He said the bus is expected to head to Baltimore on Sunday, then to Washington on Monday.

Grabowski declined to say later if that schedule was accurate.

At Saturday morning’s rally, Amber Hikes, the executive director of the city’s Office of LGBT Affairs, told those gathered: “Philadelphia is without a doubt one of the more LGBTQ-friendly cities in the country.”

She noted that Friday was International Transgender Day of Visibility and a resolution was passed by City Council on Thursday in recognition of the day.

“We are here for one purpose,” she said. “To wrap our loving arms around our trans community.” 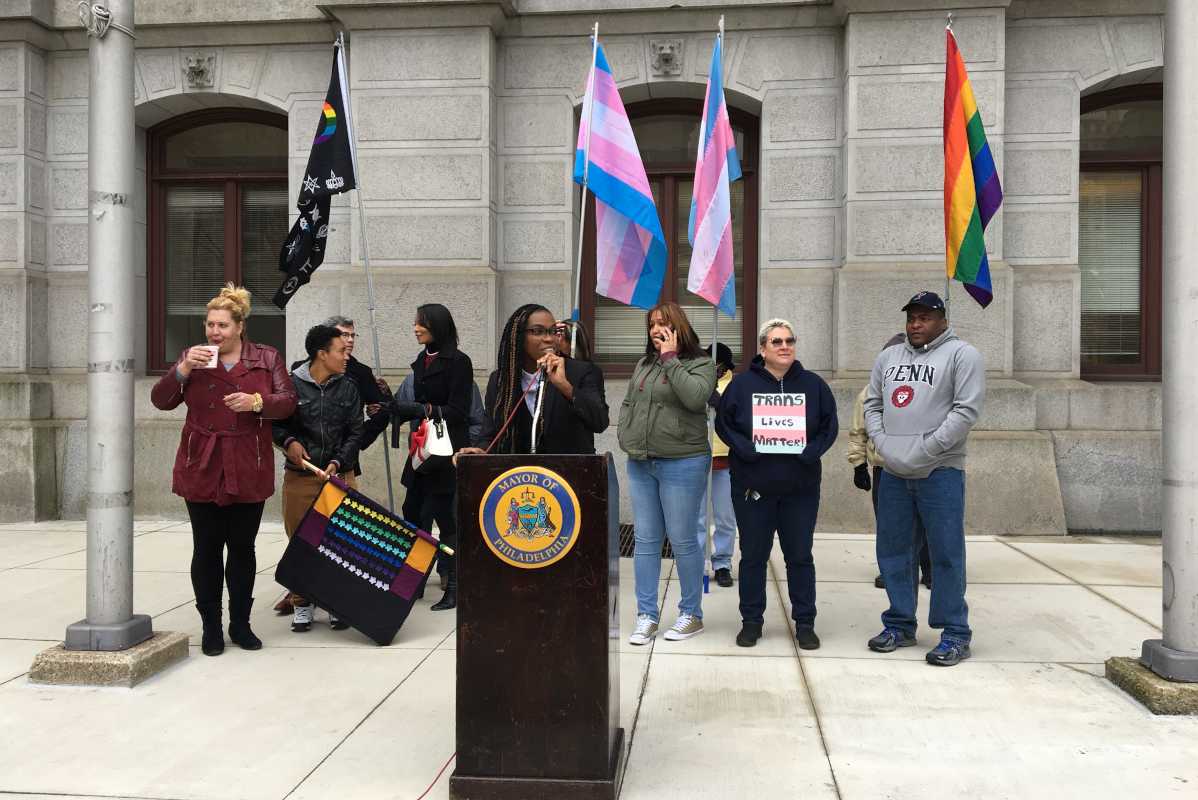