The group was near the Benjamin Franklin Parkway when one of the men stopped me and asked with a heavy-accent, Eastern European it seemed, how to find “the Rocky Center.”

I knew exactly what they were looking for. I pointed toward the Museum of Art.

For all of Philly’s history, neighborhood soul and cultural energy, few things define the city to the world quite like the museum steps made famous 41 years ago by a fictional boxer. They’ll be in the national spotlight again Thursday for the NFL draft, when real-life athletic phenoms walk down the stairs when their names are called.

The football stars will follow in the footsteps of countless ordinary Philadelphians and tourists who have made the steps an integral part of the city’s everyday energy and international charm.


On any given day, the 72 limestone stairs, five inches high and 15 deep, are packed full of locals and travelers, arriving from every corner of the planet, who run to the top, raise their arms, and pose as Rocky did. It’s almost physically impossible not to.

I’ve seen monks in thick red robes sprinting up after discarding their Birkenstocks. Visitors piling off tour buses for their chance to jog the steps. One group from the Middle East barely spoke English, but expertly hummed the Rocky theme as they raced up. In Washington not long ago, I interviewed a senator from South Dakota who mentioned, unprompted, that when his daughter ran the Philadelphia Marathon, he planned to run those steps.

He lifted his arms, Rocky-style, as he said it.

When I lived in the city — near City Hall and close enough to see the museum from my apartment window — I toured the Liberty Bell and Independence Hall once. But I went to the steps often. I walked my dog there. I brought visitors. I trained for races: one-legged hops to the top. Hopping up two feet together. Broad-jumping four or five at a time. Sprints to the museum door.


The view on the slow walk down never disappointed: the fountains of the Parkway, glittering skyscrapers in the distance, the imposing City Hall. On the stairs were a melange of people with strollers, with pets, with yoga mats. Some leaving the museum in suits. Others arriving in running tights. Rowers. Ultimate Frisbee players. Some bursting up with power and grace. Others huffing their way to the top in sandals.

Some days I’d pause at the cement imprint of Rocky’s Converse treads. A transplant from North Jersey, I’d marvel at this city: In a place with renowned hospitals and universities, with world-class food and art and a founding role in our republic, one of the most revered landmarks — on the doorstep of a palace filled with van Goghs and Renoirs — was for a movie about a simple fighter. You could understand so much about Philly right there.

The daily scene inspired a 2006 book by Mike Vitez, then an Inquirer reporter. He spent almost every day for a year at the steps, chronicling the stories of the people who ran them. Many brought their own underdog tales.

There were people who beat cancer. There was a recovering drug addict. A hoodie-clad ski bum simply celebrating that he had made a living his way. Some had dreamed of doing it their whole life. Some came to Philly solely to run the stairs.

One guy ran up buck-naked.

“It’s a physical way to bring the message of the movie to life,” Vitez said in an interview. “The stories are rich. The only thing in common is that they all come to this one place.”

Jason Fried, the general manager of Philly Tour Hub, says tour groups inevitably arrive at the stop with the movie’s horn-heavy theme “Gonna Fly Now” cued up on their phones. He estimates that his company books 100 Rocky-themed tours a year (and that’s just his outfit). Two tours ended with wedding proposals at the top. 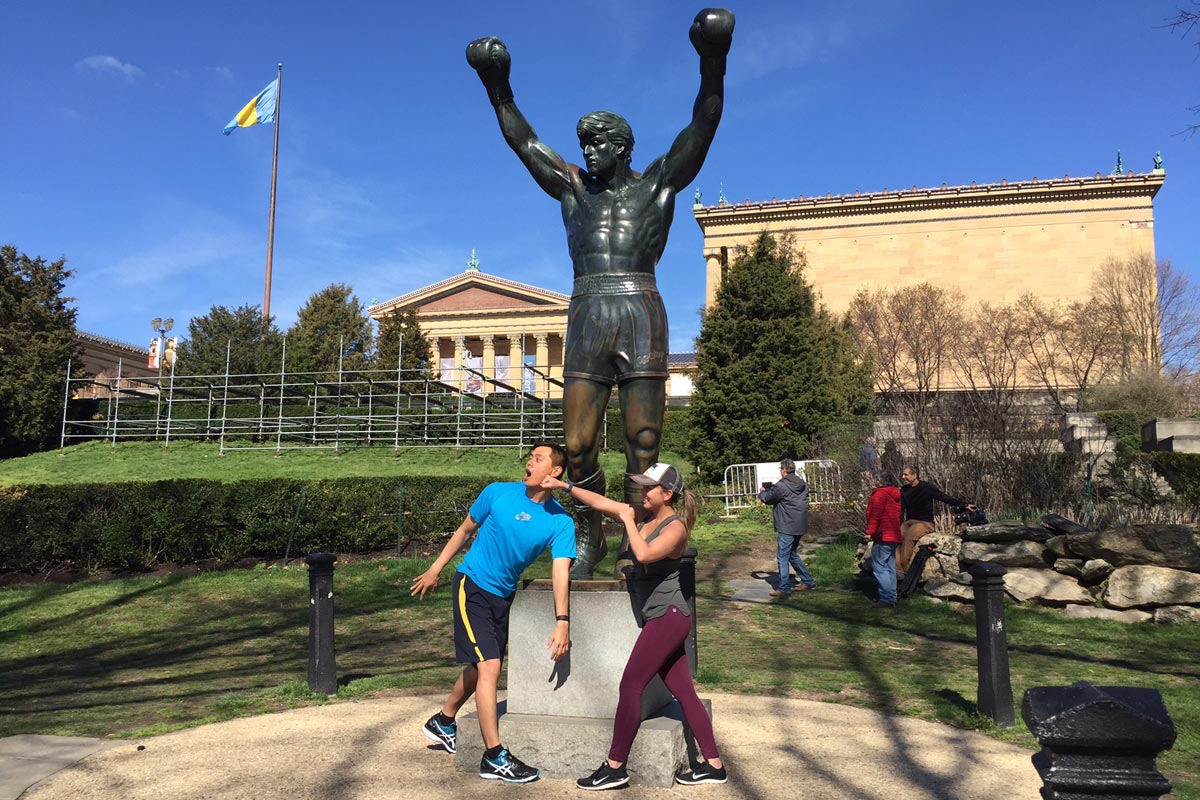 On the official Visit Philly tourism website, the Rocky statue and steps page has more page views — over 300,000 — than any other single attraction since the start of 2016, said the group’s CEO, Meryl Levitz. (Though not quite as many as the cheesesteak page).

The steps were never intended to have such resonance. They weren’t in several early designs for the museum, said David Brownlee, a Penn professor who specializes in modern architecture. Even once they were added, the expectation was that they would be for show. People would enter through side doors and ride elevators to the art exhibits.

Who would want to walk up all that way? the designers thought, according to Brownlee.

(Access to the steps has been restricted while the NFL takes over, though a side route up has stayed open).

When I considered leaving Philly for my new assignment in D.C. five years ago, I went to the steps to think it over. Sitting not far from Rocky’s sneaker prints, I looked out at the city’s landscape of glass and steel and stone and trees, and the big diagonal Parkway cutting through it. I thought about the opportunity, and all I’d miss after four years in Philly.

Whenever I’m back, I climb up again.


I never did the pose or felt any personal tie to Rocky — for me the steps are a beautiful place to exercise and see the city meld together — and I sometimes shook my head about all the people missing the art inside.

But I could see the joy the steps brought so many. Rocky himself, Sylvester Stallone, explained the allure.

“You can’t borrow Superman’s cape. You can’t use the Jedi laser sword. But the steps are there. The steps are accessible,” Stallone wrote in the foreword to Vitez’s book. “And standing up there, you kind of have a piece of the Rocky pie. You are part of what the whole myth is.”

At the draft, the top picks will become a few dozen added parts of the myth, along so many others, famous or not.