The following storylines were ones that emerged from the Sixers’ morning shootaround on Saturday, April 8th. They play the Milwaukee Bucks at The Center at 7:00 PM EST.

• Following Saturday’s shootaround, the Sixers announced that Sergio Rodriguez will miss the remaining three games on the team’s regular season schedule. The 30-year old Spanish point guard last appeared March 26th in Indianapolis, before tightness in his left hamstring began bothering him. Rodriguez, per the Sixers, has been making progress in recent days; however, the club’s medical staff determined there aren’t enough practice opportunities left between now and Wednesday’s finale in New York to adequately prepare Rodriguez to return to play.

T.J. McConnell should be available Saturday, after taking part in morning shootaround. In Thursday’s loss to the Chicago Bulls, McConnell was forced to exit the game late in the third quarter with a turned left ankle. He returned to action at the outset of the fourth, and proceeded to stay on the court for most of what was left of the period.

Gerald Henderson and Tiago Splitter are also on track to face Milwaukee Saturday. For a fourth consecutive game, Dario Saric, as expected, will be placed on a 24-minute guideline.

• While not entirely harmonious in execution, the Sixers huddled up with Dario Saric following Saturday’s shootaround for a jovial singing of “Happy Birthday.” The Croatian forward turned 23 Saturday, and joked he now feels old.

As part of the Sixers’ Fan Appreciation Night festivities later in the evening, attendees of the game at The Center will be able to take home complimentary t-shirts displaying a “The Homie Dario” graphic, in reference to one of the rookie’s nicknames. Throughout the season, he’s developed a strong, endearing bond with supporters of the team.

“I really appreciate the organization how to say give me opportunity to be some guy who be on the t-shirt,” Saric said Saturday. “For me, it means a lot. I’m very I can say like thank you, because for me it means a lot the team doing something like that to you.”

Backing from Sixers fans, according to Saric, has made his first go-round in the NBA that much more pleasant of an experience.

“Of course, it’s easy when fans support you, when you have somebody behind you, and you have your fans who really support you,” he said. “It’s easier to play in that case.”

Almost always serious, but more than capable of zinging humorous quips, Saric has seemed to embrace the enthusiasm surrounding him, and the Sixers in general.

“Sometimes, when you make smile some people, sometimes you feel better,” said Saric, who’s averaged 12.8 points, 6.3 rebounds, and 2.2 assists in 26.3 minutes per game. “If somebody see me, and he’s so excited, and so happy because of that, that means I’m doing good job, need to keep moving forward, keep continue work, and continue the same way.”

• If it’s looked to you like T.J. McConnell has been more willing 3-point shooter over the past week and a half, your eyes haven’t deceived you. Not only is the trend true, its emergence has been deliberate.

The Sixers’ last five games, the second-year point guard has hoisted 11 attempts from beyond the arc. In his 73 previous appearances, McConnell made only 43 attempts from 3-point territory.

“Once the season dwindles down, and unfortunately you know you’re not going to make the playoffs, you’ve got to work on stuff in games, and kind of put into live action,” said McConnell.

Below is a look at McConnell’s perimeter shot chart for the season. 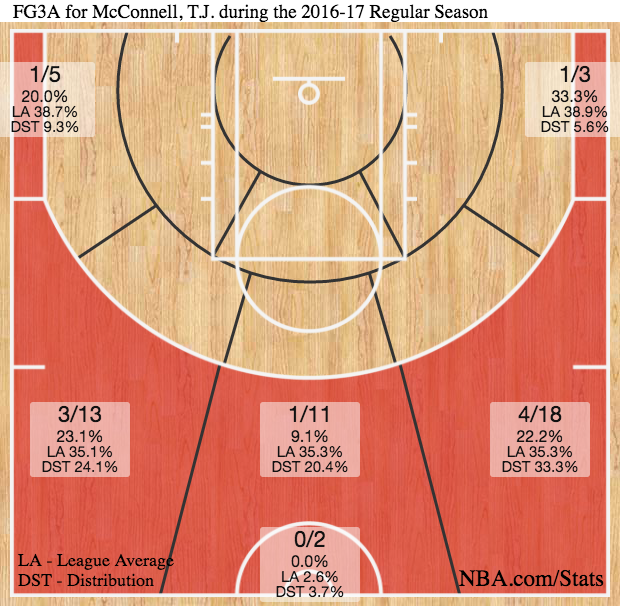