Dell’Omo said in response that he was disappointed but committed to working with the union.

Members of the Rider chapter of the American Association of University Professors (AAUP) took a one-week electronic vote through Tuesday. Of 405 members who voted, 305 voted for the resolution criticizing Dell’Omo and his team, the union said Wednesday morning. The union has nearly 500 members, representing full-time and part-time professors, librarians, coaches, and athletic trainers.

The resolution declares that “AAUP represented faculty and staff have no confidence in the ability of President Gregory Dell’Omo and his finance team to provide the leadership necessary to guide Rider University at this time.”


“A series of rash actions by president Dell’Omo and a decade of dubious financial management by his financial team has compelled Rider’s faculty to pass this motion,” the union said in a statement.

The statement cites a 2015 decision to conduct layoffs — which was later halted after the union agreed to concessions — and a decision to sell Westminster Choir College, as well as “his refusal to truly negotiate with the AAUP.”

Dell’Omo said in a statement Wednesday afternoon that he remains “deeply committed” to working with the union, despite his disappointment in the vote results.

“I will continue to meet with academic departments and other groups across the university to discuss the challenges facing Rider and remain open to any and all ideas that will help us address these issues,” he said in the statement. “It’s important to remember that our goals here are the same – we are all committed to maintaining the vitality of this university and to providing a transformative educational experience.”


Rider’s seventh president, Dell’Omo joined the university in August 2015 after a decade as the president of Robert Morris University in Pittsburgh. He inherited a university facing significant long-term pressures, and last year enrollment fell to the lowest in at least two decades.

“The university is facing continued deficits over the next several years which cannot be sustained without adversely impacting the university as a whole,” Dell’Omo and trustee chair Michael B. Kennedy said in an email blast last year, after announcing the decision to study the future of its Westminster Choir College campus in Princeton. 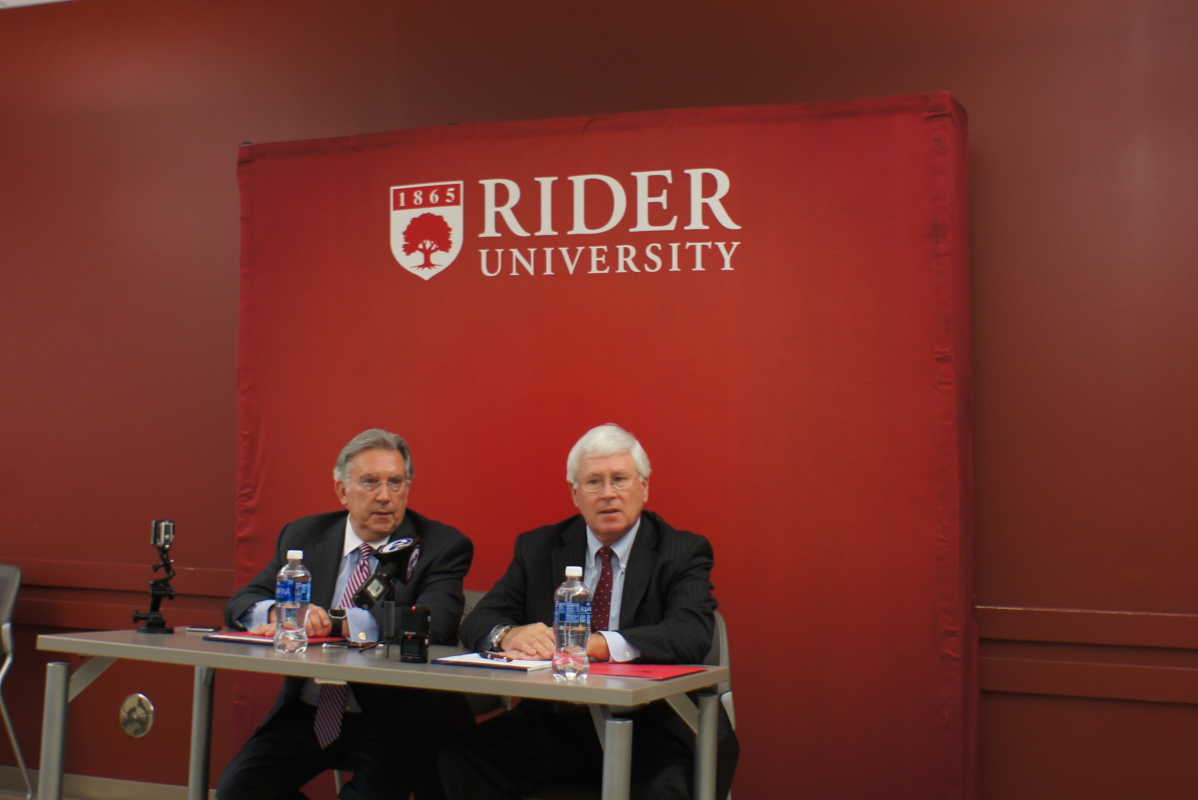 The no-confidence vote had initially been scheduled for last month but was delayed because of concerns about the timing and having enough time to discuss the resolution.

Art Taylor, the information systems and supply chain management professor who heads the Rider AAUP chapter, noted that the resolution does not call for Dell’Omo’s dismissal. The nonbinding vote is largely symbolic, a signal to the administration that faculty are unhappy.

“This is the bargaining unit members speaking and reacting to what’s happened during Dell’Omo’s term,” said Taylor.

Taylor said he recognized the financial difficulties Rider faces and that the union has been willing to work with the administration.

“Faculty, and certainly the AAUP leadership, has made clear that Rider has financial difficulties and we need to make concessions,” Taylor said. “And that means things aren’t going to stay the same.”

The current union contract expires at the end of August. Negotiations earlier this school year were unsuccessful, and are set to resume in the summer.

Some professors have publicly supported Dell’Omo, questioning the legitimacy of the union vote and noting the difficult situation the president is in.

“Essentially, this gentleman came into kind of a mess,” said Jim Riggs, a biology professor who has been at Rider since 1991. “Higher education has changed dramatically. So he came in and I think he got everybody’s attention really quick by doing a couple of things very quickly. And our union went into kind of a defensive posture. And I’m just excited to see someone who’s trying to get us through some of the financial straits that we’re in, and I envision that this guy can do it.”


Riggs said the vote likely fell along certain lines, with certain groups largely voting against Dell’Omo: Westminster Choir College professors who are upset over the last several months, part-time faculty who may feel threatened by cuts, retired faculty who do not want the university to change.

“If you could dissect that vote and look at those core people who would be here over the next 10, 20 years, you wouldn’t find such a split,”  Riggs said. “Things kind of wind up in such a fashion that make it look more exaggerated.”

Riggs said he believes Dell’Omo — the third Rider president since he joined the university — is more transparent than past leaders and has the ability to turn things around.

“Many of them are upset that the president is looking to make changes, and they’ve been at Rider for a long time,” he said. “They’ve become very entrenched and entitled in their position. So the president is coming in and saying, ‘This no longer works, this has to change,’ and therefore this has to bother people.”