Howard A. Cohen, a fanatical fly fisherman and former aide to Presidents Richard Nixon and Gerald Ford, thinks that President Trump is moving the Republican Party to the wrong side on the environment.

Not only has Trump — who once tweeted that climate change was a Chinese hoax — proposed slashing the Environmental Protection Agency, on Tuesday he also is expected to sign an executive order to undo former President Barack Obama’s signature plan to curb global warming. 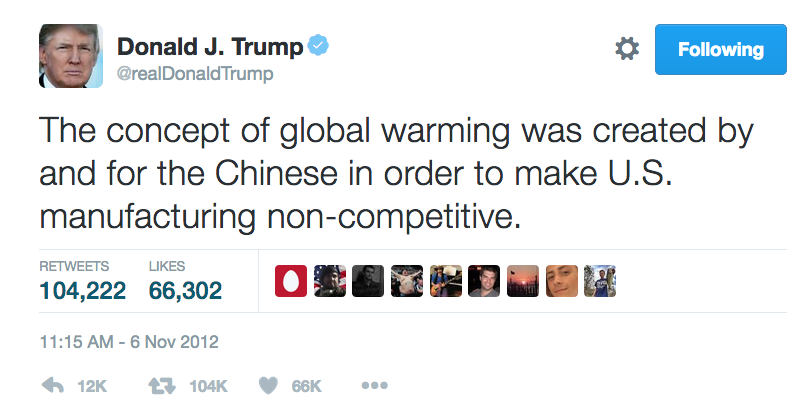 Cohen and other Republicans say it is wrong to assume that Trump has their backing on the environment.

“The Republicans got into this game very early and are still in it,” said Cohen, now a business ethics professor at Temple University. He notes that Theodore Roosevelt was the  prime mover behind the National Park Service  and that Nixon established the Environmental Protection Agency in 1970.

Cohen is particularly incensed that Trump has called for the EPA budget to be cut back to a Nixon-era level of funding, and that climate change is still being denied, despite “overwhelming” scientific evidence to the contrary.

“I don’t want this to be a partisan issue. That’s a mistake,” Cohen said. “We all breathe the same air and drink the same water,” he added, paraphrasing John F. Kennedy.

U.S. Rep. Ryan Costello, a Republican whose district includes parts of Montgomery, Chester and Berks Counties, agrees with Cohen than climate change is a bipartisan issue, not a hoax.

A recent Yale poll shows that 69 percent of Pennsylvanians, near the national average, believe global warming is underway and that a majority believe the main cause is human activities.  Many of those voters live in districts represented by GOP congressmen.  And the closer to Philadelphia and Pittsburgh, the more they believe. In New Jersey, 75 percent of residents believe in global warming.

Costello, who opposes the severity of the proposed EPA cuts, sponsored a recent House resolution on “conservative environmental stewardship,” acknowledging the impact of climate change and calling for a science-based approach to tackle the problem.

Other local Republican members of the U.S. House of Representatives, including Brian Fitzpatrick, Pat Meehan, and South Jersey’s Frank LoBiondo, are co-sponsors of the measure, which is mostly symbolic, but has drawn the signatures of 17 Republicans.

All four local Republicans also opposed Trump’s position on the Republican plan to replace the Affordable Care Act last year, widely seen as a harbinger of trouble for the president’s agenda.


Costello and others who backed the resolution are also part of the bipartisan Climate Solutions Caucus, which has 13 members from each party; newcomers can be admitted only with another member of the opposing party.

Costello called climate change “a major issue of our time” in an interview last week.  He says a mix of new clean technologies, such as solar storage and cell innovation, energy-efficient building materials, carbon capture advances, traffic reduction through computerized signaling, and developments in nuclear power could all reduce greenhouse gas emissions. He still would keep traditional fossil fuels as part of the national energy scheme, but would reduce the nation’s reliance on them.

Costello said he would argue for keeping federal programs that foster innovation, including one that Trump wants to cut within the Department of Energy that awards money to promising technology projects.

“The issue itself,” he said of climate change, “will hopefully be able to transcend partisan politics in the years to come.”

Conservative policy organizations also are chiming in on the climate change debate.

The nonprofit ConservAmerica took issue with the new EPA administrator, Scott Pruitt, after he said on CNBC that he did not believe fossil fuel emissions were a major contributor to climate change. The group said it wants to meet with Pruitt and discuss facts.


“Many on the right will not admit, publicly, that carbon dioxide emissions are the primary driver of rising global temperatures, simply because admitting that would mean their side would lose ground,” according to the group.

And republicEn, a nonprofit that consists of “conservatives, libertarians, and pragmatists,” also says climate change is real and needs to be addressed.

Conservative conservationists may agree climate change is real, but they often diverge from their liberal environmentalists on what to do about it.

For example, former GOP Secretaries of State George Schultz and James Baker were part of a group this year that backed a carbon tax designed to discourage fossil fuel use. Such a tax would impose a fee on fossil fuel plants would be passed down to industries that make products from the fuels and ultimately to consumers. But the White House has ruled out any support for a carbon tax.

On Tuesday, Trump is expected through an executive order to kill the Clean Power Plan, a series of regulations put in place in 2015 under Obama to limit carbon dioxide emissions at fossil fuel and natural-gas fired plants. Cuts to the EPA could affect states that use federal money for clean-air and water programs and remediation.


Some Democrats ask whether conservatives are lining up behind the environment in preparation for an anti-Trump pushback at the polls in 2018 .  Evan Lukaske, a spokesman for the Democratic Congressional Committee, says Republicans such as Costello are more concerned with their political careers “melting away, not the ice caps.”

But Samuel Rubin, an organizer with Food & Water Watch, an environmental activist group, says he’s glad to see conservatives get on board.

“It’s a delight to see resistance to taking on climate change break,” Rubin said. “It’s good to see any movement on climate change. Democrats haven’t been as strong as we’d like on some issues.”

Rubin notes that it was Maryland Gov. Larry Hogan, a Republican, who called last week for a ban on hydraulic fracturing, or “fracking,” saying the risks to the environment outweigh the rewards.

Cohen says Pennsylvania Republicans have a particularly proud history of conservationist policies. John Saylor, who represented the Keystone State in the U.S. House from 1949 through 1973, supported air and water standards and helped write the Wilderness Act and other programs now revered by Democrats. More recently, former New Jersey Gov. Christie Whitman headed the EPA under George W. Bush and has spoken out against Trump’s appointment of Pruitt to head the EPA and against cuts to the agency.

“The hardest part of the battle is how we, as a society in the modern world, keep an environment that’s usable for birds, fish, animals and ourselves,” said Cohen, who intends to be fly fishing soon for trout in a clear stream in East Stroudsburg. “If you want to say you’re conservative, as I do, you’ve got to acknowledge it has as its root the word conserve.”