“At 9:17 a.m., the male suspect exited the residence and engaged police. The suspect was then shot by law enforcement. He was pronounced dead at the scene at 9:29 a.m,” the state police said in a statement.

This is what the house looked like after the standoff ended.


UPDATE: Suspect in fatal shooting of Delaware State Police trooper has been shot and killed by police https://t.co/QWruQrffAW pic.twitter.com/waR3lKJpSO


Earlier, the gunman fired on police about 4 a.m. and tactical teams blew out windows in the house where he was holed up in the pre-dawn hours. 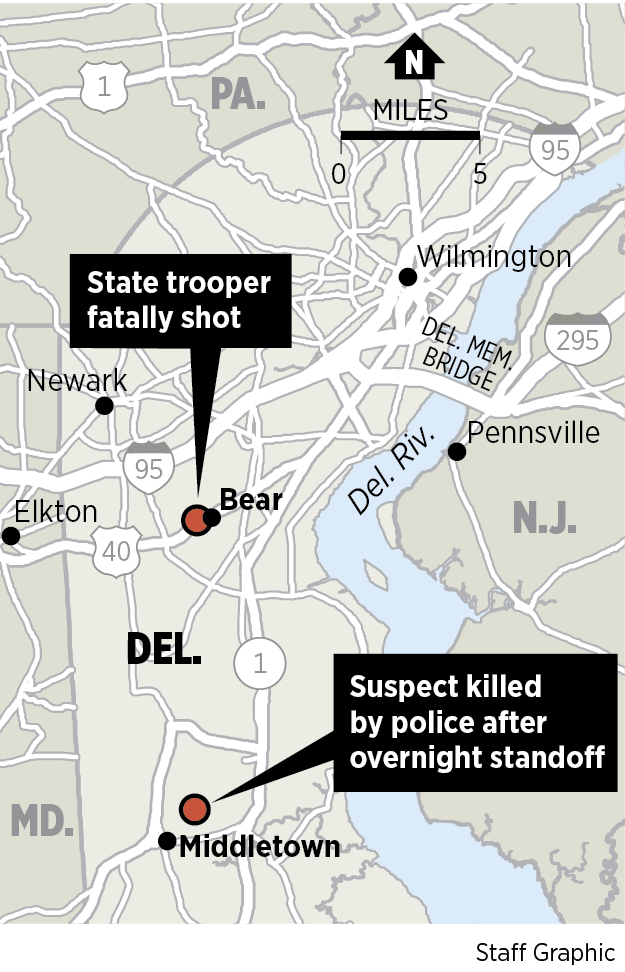 The siege, which began about 2 p.m. Wednesday, prompted officials to evacuate residents from homes in the neighborhood. Some spent the night in their cars in a nearby parking lot.

Police blew off the door to the house about 8:20 p.m. but did not make entry.

Negotiators had attempted to make contact with the suspect, but it was not clear if they did.

Ballard, 32,, an eight-year veteran of the force, was shot just after noon following a confrontation with a suspicious-looking vehicle and its two occupants in the parking lot of a Wawa in Bear, about 15 miles north of the siege scene. One of the vehicle’s occupants exited the vehicle and fired at the trooper, police said.

One suspect was taken into custody, while the other fled on foot.

During a news conference Wednesday afternoon, Delaware State Police Superintendent Nathaniel McQueen asked that the public keep the trooper’s family in their thoughts and prayers.

After the shooting, multiple law-enforcement agencies responded to the Brick Mill Farm Development in Middletown where the suspect refused orders and opened fire on police, officials said.