More than four decades ago, 11-year-old Terry Bowers was stabbed to death while on a Boy Scout camping trip in Chester County.

The Delaware County boy was killed in his green sleeping bag. The case remains a mystery.

On Thursday, the Pennsylvania State Police announced a new $25,000 reward being offered by the Boy Scouts of America Chester County Council and the Cradle of Liberty Council for information leading to the arrest and conviction of whoever killed Terry.

The victim’s family also plans to contribute to the reward amount. Separately, the Pennsylvania Crime Stoppers group offers a reward of up to $1,000 for information leading to an arrest.

Terry had been on a camping trip with Boy Scout Troop 275 from Darby’s Blessed Virgin Mary parish. On April 24, 1970, the two dozen boys and six instructors had traveled to St. Basil the Great Church, about 30 miles away in Chester County’s East Pikeland Township, where they camped on an open field on church grounds — about 200 yards from the church buildings.

In the early-morning hours of April 26, 1970, Terry was stabbed about four or five times while in his sleeping bag, according to past news reports. Police at the time said they believed the weapon was a “Boy Scout knife or an ordinary pocket knife with a three inch blade,” the Inquirer reported at the time. 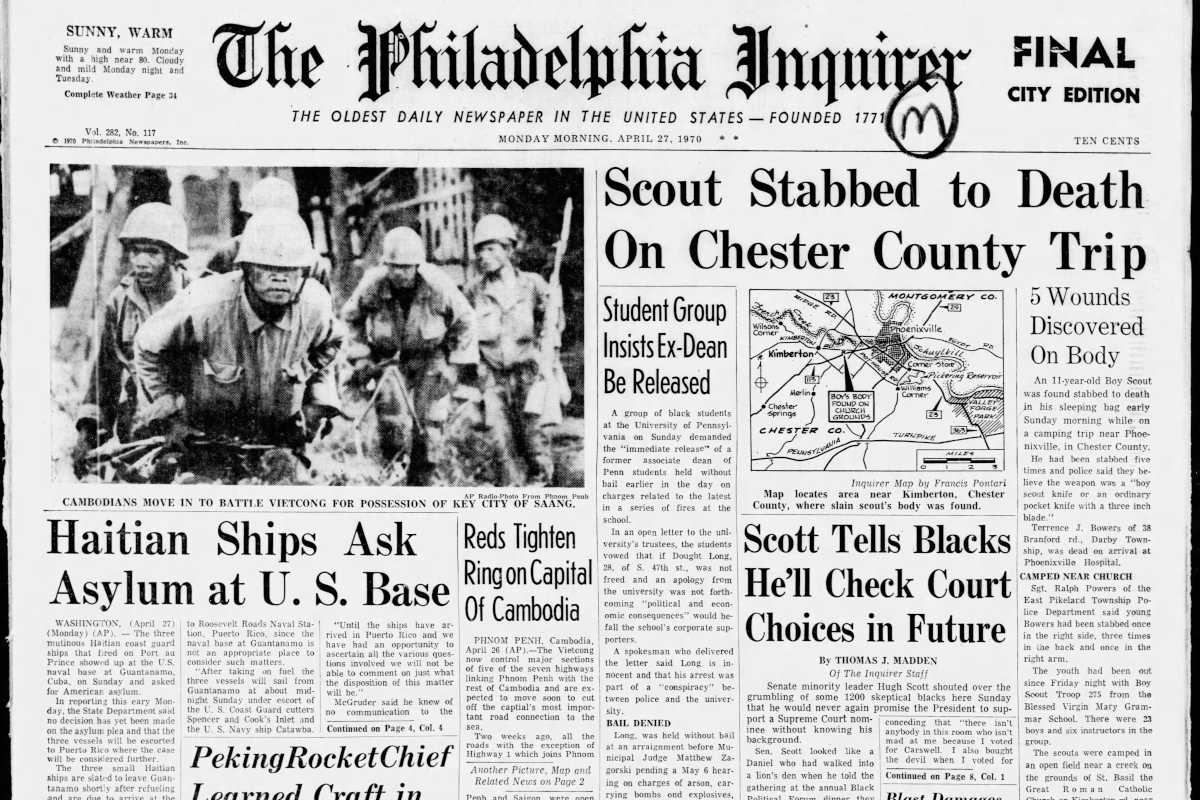 Bowers’ sister, Maureen, who was 12 when Terry was killed, told the Daily News in 2012: “How did this happen? How does a boy get stabbed to death on the grounds of a Catholic church on a Boy Scout trip and nobody hears anything. The poor little guy came home in a body bag.”

Charles Rogers, head of the Boy Scouts’ Chester County Council, said Thursday the $25,000 reward was finalized earlier this week after the State Police said they were reopening the cold case.

“It’s extremely tragic and hopefully, the reward will help somebody come forward,” said Rogers, who was an 11-year-old scout in Massachusetts at the time of the 1970 slaying.

“In 50 years with the Scouts, I’ve never heard of a scout murdered on a trip,” he said.

Numerous theories had abounded about who killed Terry. After the horrific stabbing, Boy Scouts in Darby Borough were hooked up to polygraph machines and interrogated, the Daily News has reported. Crime-scene investigators drained the pond outside St. Basil and swept the church’s property with metal detectors.

A former scout and convicted rapist, Lawrence Wakely, who served time in state prison, once confessed to killing Bowers in retaliation for being kicked out of the Boy Scouts. Wakely, according to documents, was a Scout in Spring City, Chester County, around 1960 to 1964. But according to a State Police investigator, who had since retired, Wakely had mental issues and didn’t know answers about the case that only the killer would have known, the Daily News has reported. He was dismissed as a suspect.