Six prison guards — who have since been fired — have been charged with aggravated assault and related offenses in connection with two Valentine’s Day attacks on inmates at the Montgomery County Correctional Facility, authorities said Friday. 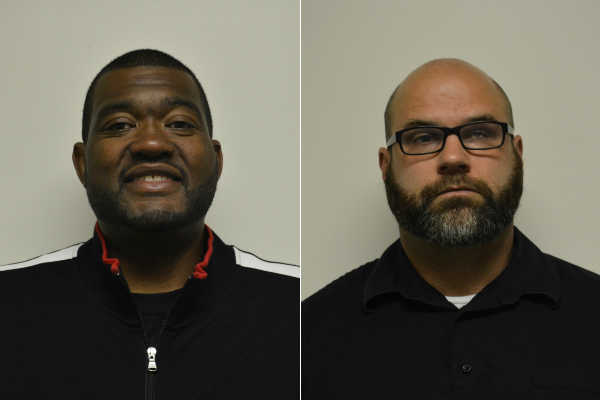 On the morning of Feb. 14, inmates Derrick Houlihan, 42, of Philadelphia, who has a partially amputated left leg, and Matthew Ruffings, 18, of Norristown, were separately attacked by correctional officers, the Montgomery County District Attorney’s Office said.

According to a grand jury presentment:


Both men told authorities that on the day before the attacks, they had separately questioned orders to clean an area of the prison.

Houlihan, who is awaiting trial on drug offenses, said after questioning an order by Collins, he was awoken the next morning in his cell and punched and kicked by Gregory, Sims and Collins. He was then taken to get medical treatment, but was not allowed to put on his prosthetic leg and was forced to hop on one leg or was dragged.

After being treated and while being escorted back to his cell, Houlihan was grabbed by Saxby, who tried to remove Houlihan’s bloodstained shirt and appeared to choke him with the shirt. Saxby, Sims, Gregory and Marshall then punched and kicked Houlihan on the ground.

Gregory was pointed out as being particularly aggressive and was later observed to be kicking Houlihan’s prosthetic leg into the day-room area.

Negron and Collins, the two higher-ups, were present during the second assault on Houlihan, but failed to intervene. Video showed Houlihan, who suffered two broken ribs, cuts and bruises, did not fight back.

Ruffings, who is awaiting trial on attempted murder and gun offenses, told authorities after he questioned an order by Sims, he was assaulted the next morning in his cell by Sims, Gregory and Collins. He suffered a broken nose and bruising to his face.

The six were charged with aggravated assault, conspiracy, obstruction of justice and related offenses. They were arrested Friday and released after arraignments.

Defense attorneys for Collins, Gregory and Sims said they had just received the criminal complaint, which they were still reviewing. Attorneys were not listed or did not immediately return a call for the other three.