“Is compromise so terrible that those who attempt it are falsely attacked with paid advertising that is filled with blatant lies and misrepresentations?” MacArthur said, facing reporters at a press conference at his district office in Marlton.

MacArthur, who represents the Third Congressional District covering parts of Burlington and Ocean Counties, referred to advertising launched this week by Save My Care. The group, which opposes repealing the Affordable Care Act, is spending $200,000 on television advertising targeting him, MacArthur’s office said. The group didn’t respond to questions Wednesday.

MacArthur called the ad’s characterization that he “isn’t fighting” to protect coverage for pre-existing conditions “a blatant falsehood” and noted that he had also been targeted by the conservative Club for Growth group.


“People see and hear things differently,” MacArthur said. “Just because somebody disagrees with you doesn’t mean their motives are bad.”

He also criticized protest organizers, citing an email from a local Indivisible group leader sharing a call for constituents from other districts to attend a vigil outside his office Wednesday afternoon.

While “I am perfectly OK with people protesting,” MacArthur said, “they’re working … to make it look like constituents are madder and in greater numbers than they are.”

He didn’t plan to meet with protesters outside his office by the Indian Spring Country Club, where about 20 people held signs opposing “Trumpcare” and calling on passing motorists to “Save the ACA, Call MacArthur.” 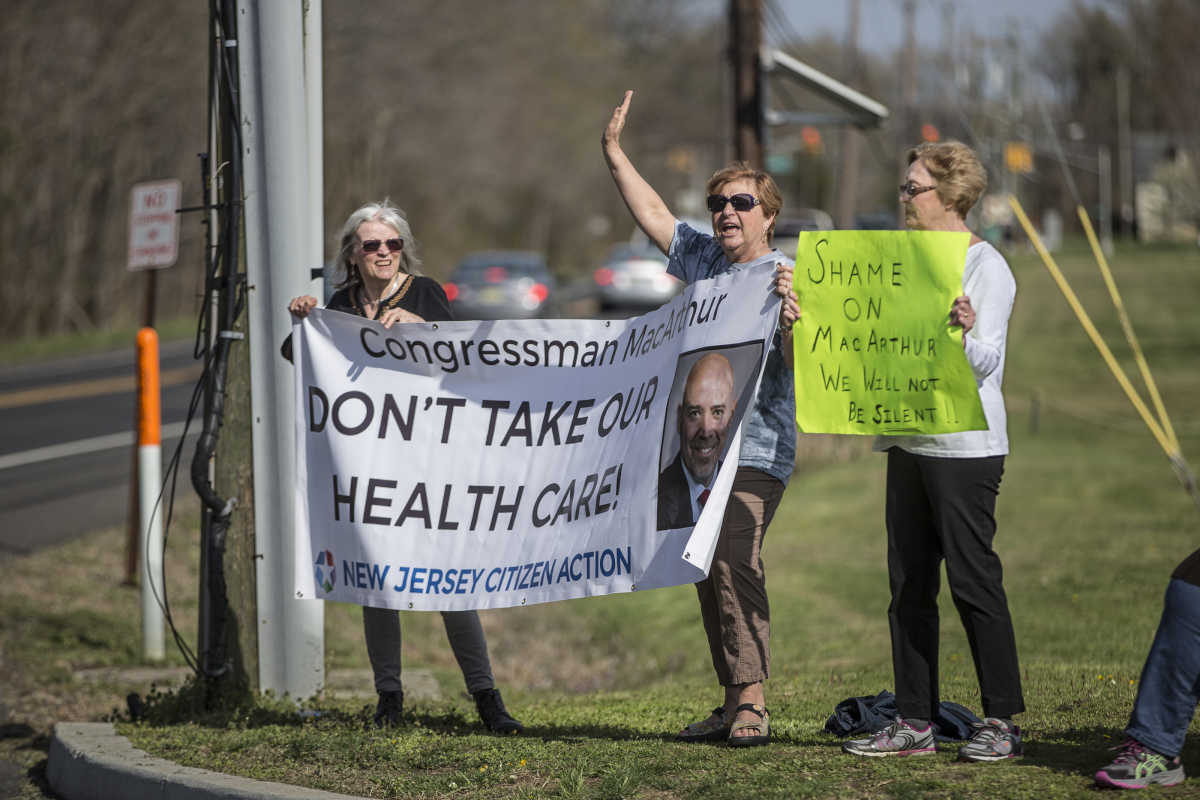 Maura Collingsru, health-care program director of the liberal New Jersey Citizen Action group, said there was “nothing dishonest” about urging people outside MacArthur’s district to show up.

“He’s the only member of Congress in the state of New Jersey” who didn’t oppose the “disastrous” health-care bill, Collingsru said.

“At this point,” she said, “we would encourage everyone to call Tom MacArthur.”

A co-chairman of the moderate Tuesday Group in the House, MacArthur said he had “been in discussions this week” with the president, vice president and congressional leaders about an amendment MacArthur put forward to the health-care bill. The bill, which would have repealed and replaced key portions of the Affordable Care Act, didn’t garner enough support among the GOP before a scheduled vote last month.

MacArthur didn’t outline the details of his amendment or address whether the health-care bill could pass without concessions to the conservative Freedom Caucus. “I don’t look at the bill through the lens of this political caucus versus that political caucus,” he said.

Other New Jersey GOP representatives said they would not vote for the bill, in part due to cuts to the Medicaid program. MacArthur said Wednesday that “nobody” on Medicaid “will lose a thing.”

A former insurance executive, MacArthur said he had pushed to add funding to the bill “to protect the most vulnerable.” He called the current health-insurance system “too expensive,” with too little choice in the insurance marketplace.

The Congressional Budget Office projected that about 24 million fewer Americans would have health insurance in 2026 under the GOP bill than if the current law stayed in place.

MacArthur, who described his district as “one of the few swing districts left in the United States,” said “it’s been suggested to me that I made myself more vulnerable by being front and center” in the health-care debate.

MacArthur, who is in his second term, denied concern that he would face a challenge in the 2018 election. “I am not thinking about this in political terms,” he said.