As Jim Johnson shook hands with members of a Collingswood civic group Thursday night, a voter approached him and lamented the state of the country’s campaign-finance system: “You have to follow the money.”

“I used to work in the Treasury Department,” Johnson, a Democratic candidate for governor of New Jersey who was a high-ranking official in the Clinton administration, responded with confidence. “I know that.”

In the June 6 Democratic primary, New Jersey political pundits are betting on Phil Murphy, a former Goldman Sachs banker and ambassador to Germany. Murphy has lent his campaign $10 million and has the support of the party apparatus, as well as important Democratic constituencies such as labor unions and environmental groups.

Quietly, though, Johnson, a lawyer and political unknown before he declared his candidacy in October, is trying to upend the race. He’s running as an outsider who argues his experience on budgeting and social-justice issues make him the right person to challenge “insiders” in Trenton and reset the state’s priorities when Gov. Christie leaves office in January.

A former chair of the progressive Brennan Center for Justice at New York University School of Law, he is campaigning, in part, on an ethics platform of eliminating no-bid contracts and requiring greater disclosure from lobbyists. “We can’t have real change with the old way of doing business,” he said in an interview. Johnson, who would be the state’s first black governor, also wants to expand access to prekindergarten and proposes offering two years of free tuition at community colleges for students whose families earn less than $90,000. 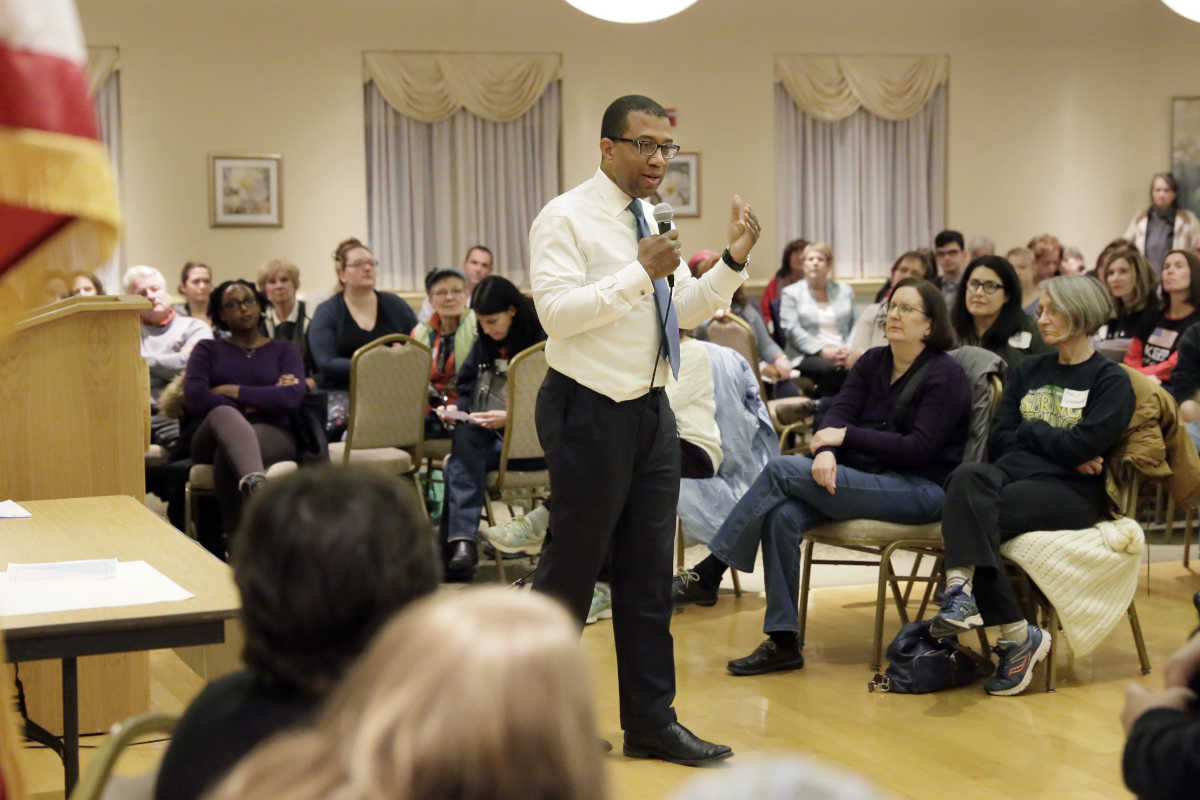 Soft-spoken and a self-described consensus-builder, Johnson, 56, of Montclair, is married to Nancy Northup, president and CEO of the Center for Reproductive Rights; they have four adult children.

Johnson, a former federal prosecutor, speaks critically of Christie and President Trump, sure, but he casts himself more as a liberal pragmatist than leader of a new Party of No.

“You shouldn’t confuse his evenness with a lack of passion,” said Deval Patrick, the former governor of Massachusetts, who has known Johnson since they worked in the Clinton administration.


Johnson and Patrick cochaired a task force under President Bill Clinton that investigated a spike in church arsons in the 1990s. (“Jim was always Mr. Cool,” Patrick said.)

Patrick recalled an arson site he visited with Johnson when he was assistant attorney general for the civil rights division and Johnson was assistant Treasury secretary for enforcement. The burned-out church was in Alabama, where slaves used to worship.

The deacon had one leg and “must have been a thousand years old,” Patrick said. “He stood in the ashes of this church, trying to explain to us what the loss of this church meant to him and the community of worshipers.”

“Understand,” Patrick continued, “this is not what you need for the investigation. It’s not about gathering the facts. It’s more about understanding the meaning of what had happened.


“I remember Jim was super quiet. He just met this man’s gaze with a steady gaze.” When they returned to the car, Johnson’s voice cracked as he said, “That one really got to me.”

“What Jim is about is getting the job done, and for him, there’s an emotional component to why it’s important to get the job done,” Patrick said. “But his functional self says, ‘Keep my exterior together.’ ”

In 1998, the National Church Arson Task Force reported that arrests had been made in 34 percent of the 670 arsons it investigated, double the 16 percent rate nationwide.

Nearly a decade later, Gov. Jon S. Corzine named Johnson chair of an advisory committee on policing that recommended an end to federal monitoring of the State Police, which had been dogged by a racial-profiling scandal in the late 1990s.


In accordance with the committee’s recommendations, the state enacted a law in 2009 establishing an office within the Attorney General’s Office that continued to monitor the State Police.

Johnson calls the law a national model and says it was the result of his committee’s ability to forge consensus among leaders in the civil rights community, troopers unions, law enforcement, and the public.

More recently, he helped lead a group that successfully pushed for a statewide body-camera policy for police.

Add to all that his role as a federal monitor of an affordable-housing settlement between the Justice Department and Westchester County, N.Y., and Johnson’s campaign sees a candidate with the record best prepared to tackle New Jersey’s problems.

Johnson says he was inspired to run after the 2015 Charleston, S.C., church massacre. 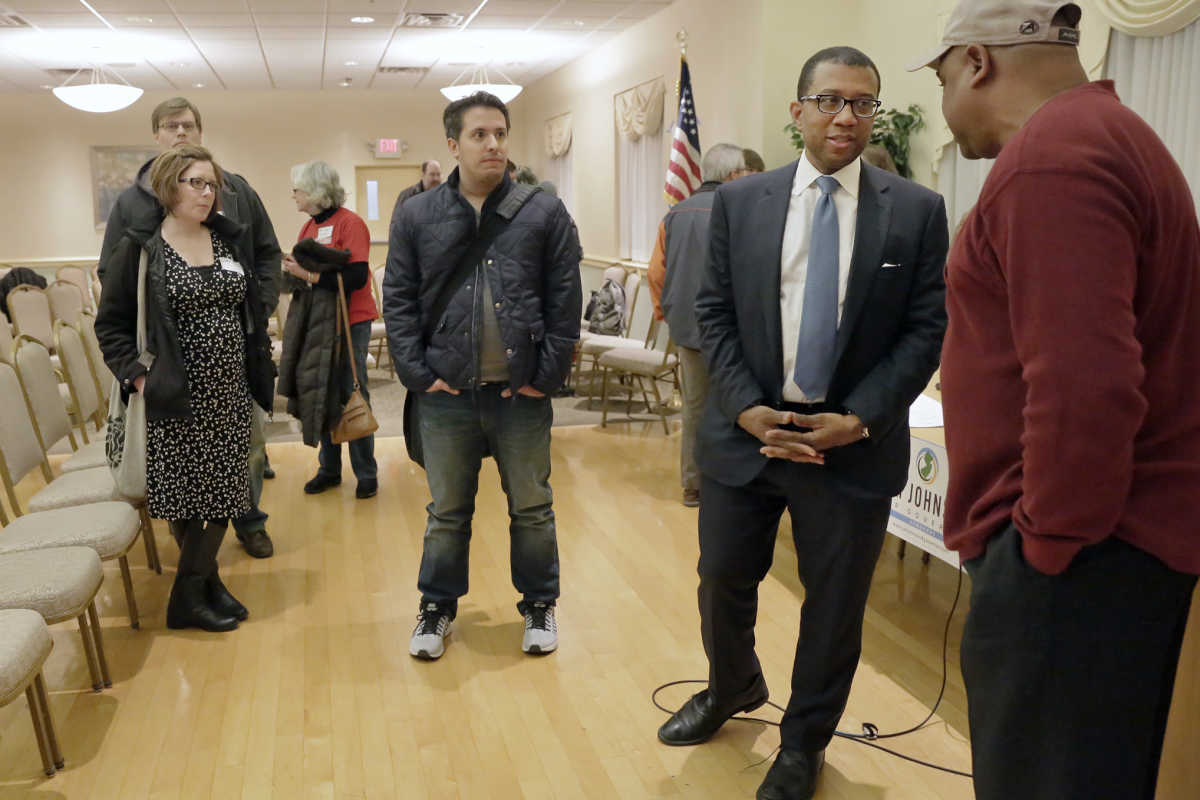 One of his challenges in the primary campaign is raising his profile. Just 4 percent of registered Democrats say they would vote for Johnson, according to a March 15 Quinnipiac University poll. Murphy leads the field with 23 percent support, but the poll shows 60 percent of Democrats don’t know enough about him to form an opinion.

Yet Johnson has surprised Garden State political insiders by his ability to raise money. In early January, Johnson announced he had raised $430,000, the threshold to qualify for public matching funds. Under the state’s gubernatorial public-financing system, candidates receive $2 for every private dollar they raise. They can spend a maximum of $6.4 million in the primary and must agree to participate in debates.

As of January, the majority of his donors lived in New York and accounted for nearly 60 percent of his campaign haul, records show. About 30 percent of his donations, or $132,900, came from colleagues at his old firm.

In a seven-figure cable-ad buy his campaign launched this month, Johnson says he’s “operating against a set of machinery that’s been in place for a very, very long time.”

Fighting against Trenton “insiders” may be a compelling message, but Johnson may have difficulty distinguishing himself. For example, Murphy, the front-runner, vows on his website to “take on the special interests” and “end politics as usual.” And Wisniewski says he’ll stand up to “transactional party bosses” to “transform New Jersey’s politics.”

Johnson believes he has an opening. “It’s not just a question of message,” he said in the interview. “It’s a question of a record over many decades of bringing about change and not being tied to the key political interests.”