As soon as the food hit the trough with a splat, the pigs came running.

And on this dreary morning, it was a feast — leftovers from a 30-gallon mash of barley oats and wheat with a bit of a kick.

Within minutes, the soppy, pungent waste product of a small Medford, N.J., brewery was gone. The cacophony of grunting and squealing quieted.

The humans standing outside the pen saw a reason to celebrate.


A mother-son team of beer-makers at the Lower Forge Brewery had easily reduced their production waste to nearly zero, a feat that has earned them accolades from Sustainable New Jersey, a nonprofit that promotes recycling and that partners with the New Jersey Department of Environmental Protection.

“Brewing and farming go hand in hand,” said Sean Galie, a professional firefighter in Princeton who owns and operates the one-year-old microbrewery with his mother, Pola Galie.  In the past year they donated 7,000 pounds of spent grain to farmers in the South Jersey area and saved more than $1,000 in trash hauling and landfill fees. 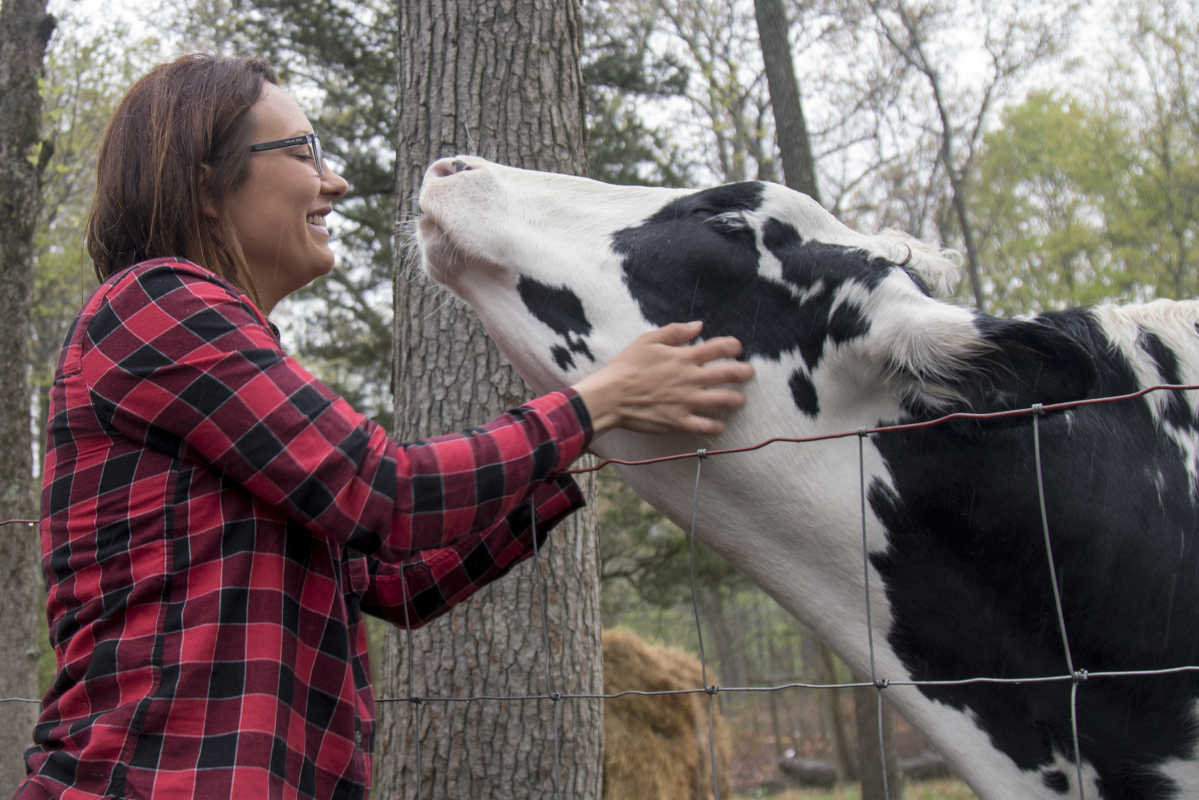 Megan Heino, the owner of J & M Farm, was enthused over the partnership too.  “It saves us money and it saves you money – It’s great,” she said, smiling at the Galies.

Heino raises about 20 pigs, 20 goats, 200 chickens, four turkeys, three cows, and two sheep on a Medford farm, a few miles from the downtown microbrewery.   She often mixes the special “brewer’s grain” with normal feed, which contains nutrients, and gives it to the pigs and cows.

Do the animals slurp up the concoction with more gusto?  Do they seem happier — and perhaps more mellow — than usual these days?

“Nah, it’s all the same to them … They’re animals, to be honest, and animals eat it all,” Heino said.

On this morning, Olaf, her black-and-white steer also devoured some of  the grains, but at a slower pace than the pigs.  He looked peaceful, but then again, most cattle have perfected that faraway gaze.

Sean Galie, 37, jokes about how the brewery treats the animals to the “good stuff” —  malted barley, flaked oats, wheat, and sometimes hop mash” made for humans. It also has a tad more sugar than their usual grub.

But he scoffs at any suggestion the strong-smelling grain might give the animals a buzz.

“There’s no alcohol content,” he said.  Still, he concedes “there may be a tiny bit of chemistry going on — it might be germinating and getting a little bit of funk,” he said.

Galie said the grain also might have extra flavor because it steeps in a vat of boiling water that becomes “baby beer,” the sugary precursor to beer – before the yeast is added and fermentation occurs.  “You could say this grain is like icing on a cake,” he said. 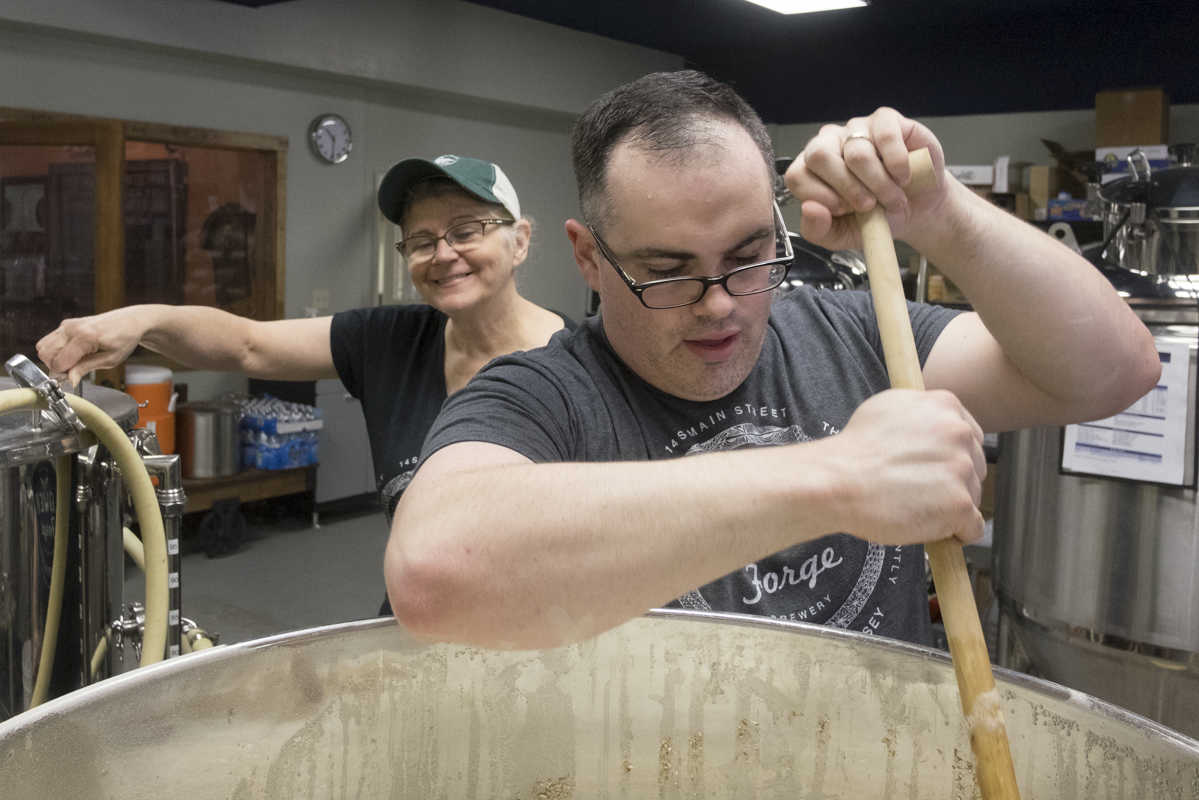 Last week he demonstrated his small Main Street operation, which produces three to six barrels one or two times a week.   He poured 215 pounds of barley and some hops into a gleaming silver vat with 70 gallons of boiling water.  He vigorously mashed the oatmeal-like mix with a slotted wooden paddle to get the lumps out.

Soon, the mix started to bubble and formed a layer of steaming  foam.  It simmered for about an hour.

“It’s like tea,” said Pola Galie, who is also an herbalist, a beekeeper, and a weaver.

Later, liquid was extracted from the mix and sent on its way to other vats in its journey to become beer.  In this case, it will become a new brew — Magical Mosaic.  The wet barley left behind would then be placed into 30-gallon containers for the farmers to come and take.

Pola Galie said the spent grain is also given to sheep and chicken farmers in the area who use it for feed and to a farmer who mixes it with horse manure and makes compost piles that create a rich soil for crops.

She also is experimenting with using the brewer’s grain to make dog biscuits — after drying it out — and has gotten inquiries from some people who would like to use it as a very special ingredient in cookies, she said.

Sean Galie said their brewery is one of four in the state — and the smallest in the group — to be recognized for using sustainable business practices.   It is listed on the New Jersey Sustainable Business Registry which cited the Lower Forge Brewery for reclaiming water used in the brewing process, for saving on energy consumption, for using produce from local farmers for its blueberry and cranberry beers, and for putting the spent grain to good use.

Pola Galie said brewing beer is fun, and also satisfying.  She enjoys working with area farmers, purchasing their produce to convert it into beer, and then providing them with the spent grains.  Being sustainable is “huge for me,” she said.  “I have grandchildren and I don’t want them to have to go to a museum to see a tree.”

Galie said she also gets a few extra perks from the arrangement with farmers — free fresh eggs, wool from the sheep, and just-picked vegetables.  One pig farmer, she said, is on her to-do list.  “I tease him that I would like to have some bacon to go with my fresh eggs,” she said. 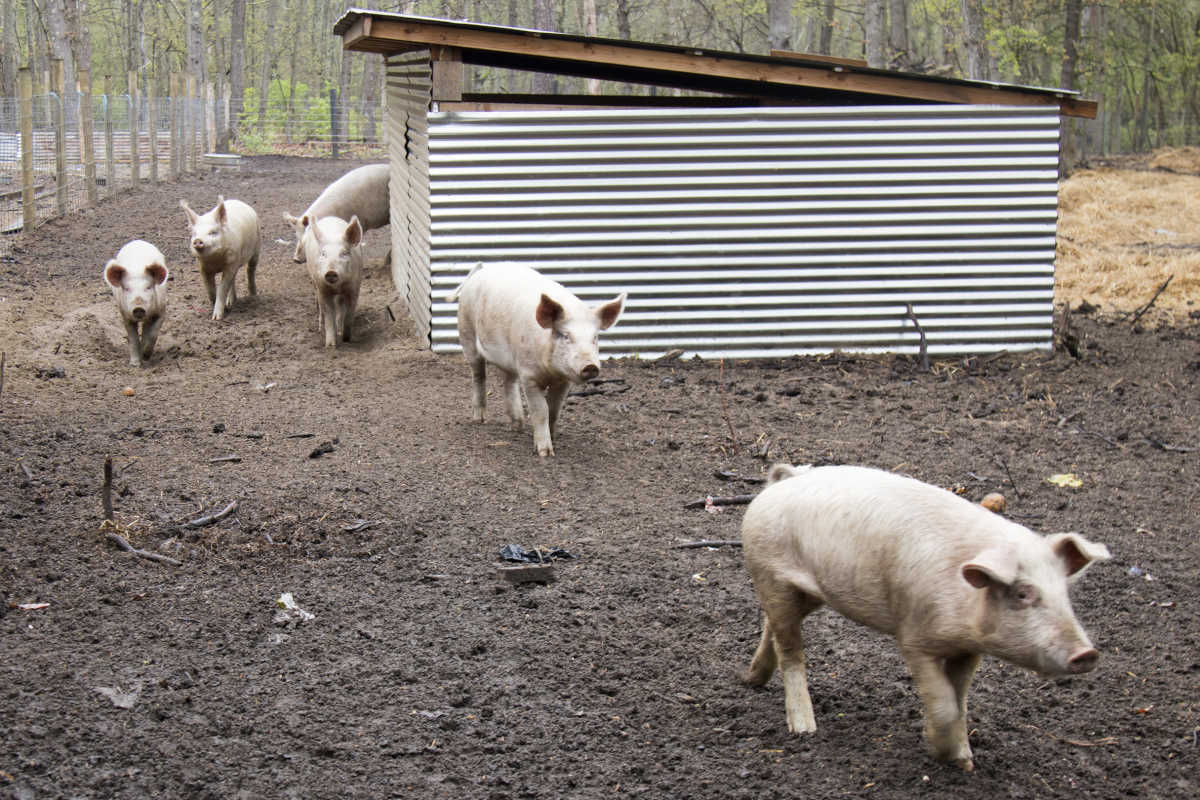