For Timothe Luwawu-Cabarrot, fitting in at the NBA level was never a matter that was up for much internal debate. He’s long felt that if given an opportunity to showcase his potential, he would be able to prove himself.

Over the past month, the speedy, athletic wingman hasn’t disappointed.

In 14 consecutive games since assuming regular starting duties March 11th at the L.A. Clippers, Luwawu-Cabarrot has put up encouraging numbers, averaging 11.7 points (41.2 fg%, 31.2 3fg%), 3.8 rebounds, and 1.9 assists in 29.6 minutes per game. During this stretch, he’s also topped the Sixers with an auspicious defensive rating of 101.6 points allowed per 100 possessions.

But as eye-catching as Luwawu-Cabarrot’s stats have been, so too has his assertiveness. When on the court, he acts as if he belongs, a mindset that has seemed to work to his advantage, regardless of how young and green he actually is.

While the Frenchman has always been confident, he credits Brett Brown for further unlocking that part of his psyche.

“I think the more I play, the more I improve,” Luwawu-Cabarrot said earlier this week. “The more the coach gives me confidence, the more confident I will be. I think my confidence at the best right now.”

Given the game logs he’s been turning in lately, there’s no reason it shouldn’t be.

The Sixers’ past three contests, Luwawu-Cabarrot has combined to score 61 total points, doing so on 20 for 45 shooting. Against the Raptors last Sunday, he netted a career-best 23 points. In Tuesday’s loss to the Nets, he not only racked up 19 points, but rounded out his box line with three rebounds, three assists, and three steals.

“I think consistency, maybe,” said Luwawu-Cabarrot, when asked about the progress he’s made this season. “Defensively, too. And maybe the decision I make on offense when I have the ball in my hand, when I try to cut back doors, and do some stuff like that. That’s where I improve the most.” 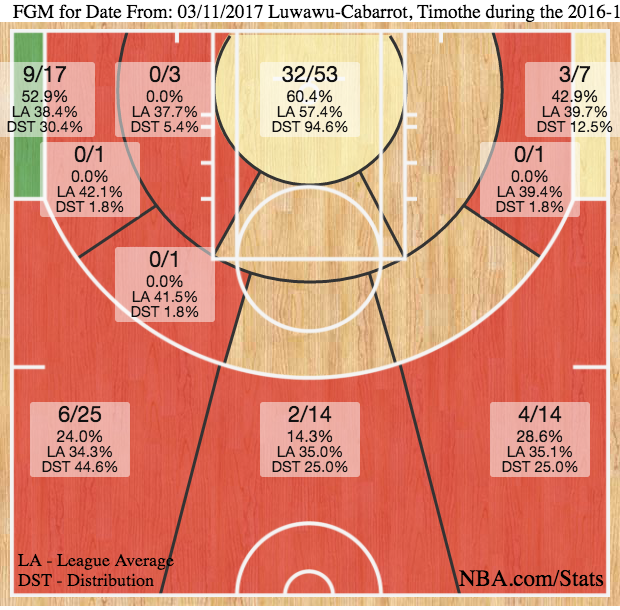 The shot chart above shows Luwawu-Cabarrot’s work from the field since being bumped up to the Sixers’ starting lineup, a development originally born out of necessity due to the team being shorthanded. In announcing the move that March 11th afternoon at Staples Center, Brown said the decision was neither a promotion for Luwawu-Cabarrot, nor a demotion for anyone else. On the contrary, Brown’s motive was to experiment.

As Luwawu-Cabarrot’s shot chart demonstrates, the bulk of his production has come on the interior, a reflection of how effective he’s been flying and driving to the basket. Only T.J. McConnell, Dario Saric, and Nik Stauskas have driven to the basket more often than Luwawu-Cabarrot since he joined the top unit.

In terms of 3-point shooting, Luwawu-Cabarrot has kept on firing, a philosophy the Sixers coaching staff promotes, as long as looks are clean. The corners, clearly, have been his best spots.

“He’s growing his confidence with his shot,” said Brown, who’s a fan of Luwawu-Cabarrot’s “tenacity.”

“In general, he’s been really good for us.”

Dario Saric, like Luwawu-Cabarrot, in his first season with the Sixers, has also seen promising signs.

“Beginning of the season, he tried to have some kind of adjustment on the new team, new teammates,” said Saric. Another similarity that he and Luwawu-Cabarrot share is that both came to the Sixers with prior professional experience, having competed overseas.

“Last couple games, he’s doing really good,” Saric added. “I’m very happy because of him. I know he push himself for that. We talk all the time about, ‘I can do this, I can do this.’ I say, ‘Of course you can do this, and you just wait your five minutes,’ how we say in Europe.

“He got that five minutes. He show himself he can play, he can score, he can dribble. For sure, he’s a guy who the Sixers in the future are supposed have in their mind because he’s a very competitive guy. For sure, he will help us.”

Between stints in France and Serbia the last two seasons, Luwawu-Cabarrot appeared in a total of 75 contests. This year, he’s on-pace to come within three games of that number, based on combined outings with the Sixers (65), and their NBA Development League affiliate, the Delaware 87ers (3).

The increased workload, Luwawu-Cabarrot admitted, has been a change.

“For sure, tired, but it’s all mental,” he said. “If you think you can do it, you will do it. It’s just the first year, the rookie year. My body’s not used to it, but I think next year is going to be fine.”

With four games left on the Sixers’ schedule, Luwawu-Cabarrot has positioned himself to take valuable momentum into the spring and summer. Along the way, he aims to help his club’s cause

After catching up with family and friends back home, Luwawu-Cabarrot sounded as if he doesn’t plan to be too detached from basketball this off-season. He said he loves the game, and indicated he’ll probably find some gyms to shoot in, wherever he is.

Looking ahead, as Luwawu-Cabarrot’s game continues to grow, you’d expect his strong sense of self-belief to do the same.

“I knew I could play,” said Luwawu-Cabarrot. “I knew that I was better than some of the players, and I was better than everybody thought. I just had this confidence. I think the confidence that Coach gives to me while the games was going on, just gave me like the time on court to show everybody.”

Fourteen days ago, when the Sixers visited Chicago, the Bulls really looked nothing like a playoff team. Their performance was disjointed, and their collective confidence seemed to be down.

Nonetheless, in the days immediately following its lopsided defeat to the Sixers, one that caused the home crowd to stir restlessly, Chicago has snapped out of whatever funk it had been in. First came a road victory over the Milwaukee Bucks, then a three-day lay-off, before the Bulls posted a come-from-behind victory over the Cleveland Cavaliers. Chicago proceeded to knock off the Atlanta Hawks and New Orleans Pelicans after that, prior to its season-high tying four-game winning streak coming to an end Tuesday in New York against the Knicks.

Thanks to this timely spurt, the Bulls have rumbled back into post-season contention. As of Thursday morning, they shared seventh place in the Eastern Conference with the Miami Heat, with four games to go in the season.

Perhaps not so coincidentally, with the playoffs now a possibility, reports have surfaced that Dwyane Wade – once thought to be out for the season with an elbow injury – could actually be cleared for action as soon as this weekend. The native Chicagoan, who signed with the Bulls last summer, has averaged 18.6 points per game.

In breakthrough fashion, the Sixers snapped a 12-game losing streak to Chicago the last time the two teams met, and the 117-107 final score March 24th at United Center didn’t really do the Sixers’ efforts justice. Behind a dominant performance in the paint, the Sixers built a margin as large as 26 points. Dario Saric led the way with a career-best 32 points, to go along with 10 rebounds.

The Sixers and Bulls have squared off two other times this year as well. Chicago defeated the Sixers 105-89 and 121-108 on November 25th and January 29th, respectively. The Sixers last earned consecutive victories over the Bulls in the same season during the 2010-2011 campaign.