HARRISBURG — Graham B. Spanier, the former Pennsylvania State University president once considered one of the nation’s most prominent college leaders, was convicted Friday of endangering children by failing to act on signs that Jerry Sandusky was a serial sex predator.

After nearly 12 hours of deliberation, a Dauphin County jury of seven women and five men found Spanier guilty of a misdemeanor count of endangerment. He was acquitted of a second endangerment count, as well as a felony conspiracy charge.

Still, the guilty verdict was a stunning blow to Spanier, 68, who had long proclaimed his innocence, and to his supporters, who had fiercely defended him and accused prosecutors of overreaching and unfairly staining the university. Many, including Spanier’s wife, Sandra, a Penn State English professor, and his son were in the courtroom to hear the verdict.

Spanier didn’t appear to react when it was announced and declined to comment later. His lawyer promised an appeal.

The long-awaited trial seemed an opportunity to settle once and for all an unresolved issue that for more than five years divided the Penn State community about its most damaging scandal: whether university leaders deserved blame for not recognizing or stopping Sandusky’s assaults on children.

Prosecutors said that despite knowing about a 1998 police investigation into a claim that Sandusky showered with a boy, Spanier agreed in 2001 with then-athletic director Tim Curley and vice president Gary Schultz not to report a similar claim from assistant coach Mike McQueary:  that he saw Sandusky assault a young boy in a campus locker-room shower after hours.

That inaction, prosecutors argued, was one step that enabled Sandusky to sexually abuse at least four more children in the years to come.

Pennsylvania Attorney General Josh Shapiro, who this year took over the office that spent nearly a decade investigating and prosecuting the Sandusky case, said the verdict showed no one is above the law.

“There are zero excuses when it comes to failing to report the abuse of children to authorities,” he said. 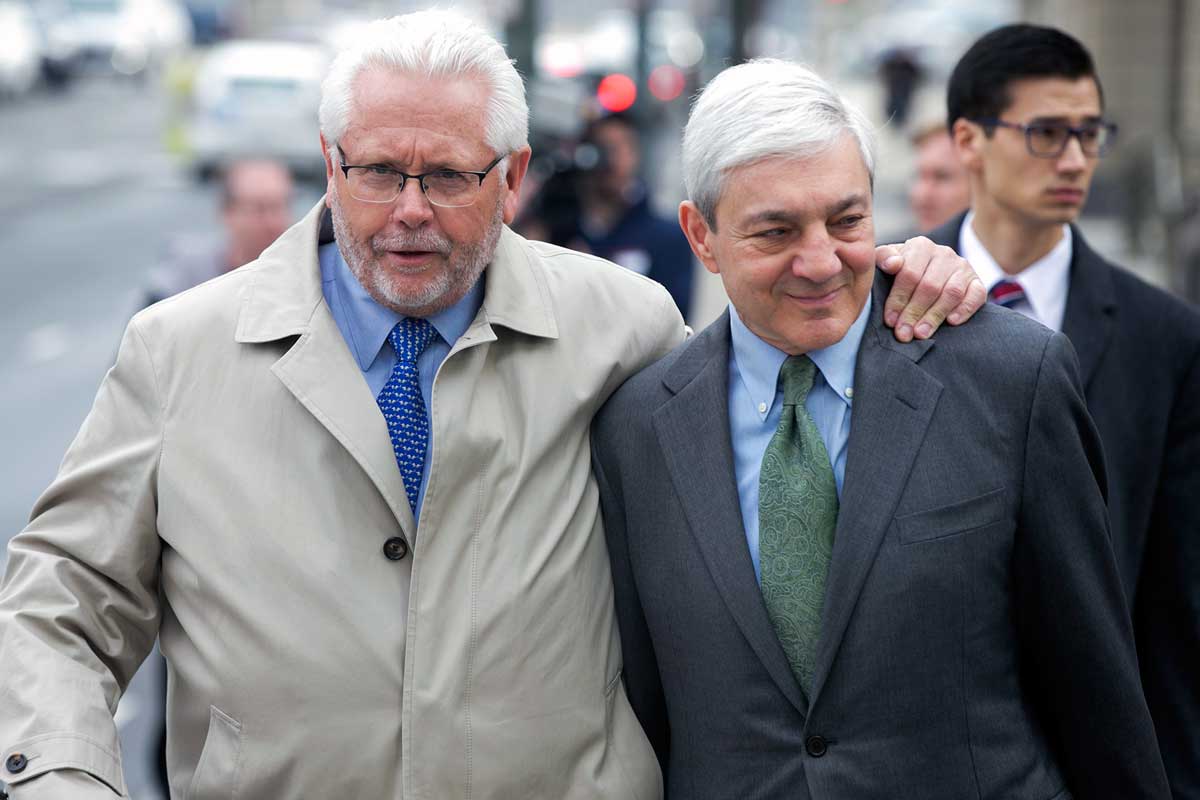 Spanier remains free on bail pending sentencing. His lawyer, Sam Silver, said they were heartened by the jury’s acquittal on the two counts and would challenge its decision on the third. That count had originally been a felony, but jurors downgraded it to a misdemeanor after determining that it didn’t reflect a pattern of conduct over time. They did, however, find his action or inaction in 2001 ultimately endangered other children, specifically those Sandusky later abused.


For that, he could go to prison. The statutory maximum is five years, but with no criminal history, Spanier could argue for probation.

The verdict meant similar misdemeanor convictions for all three defendants, who for years battled the charges in court. Schultz and Curley pleaded guilty last week.

In a statement after the verdict, Penn State’s administration said its thoughts were with Sandusky’s victims and pledged heightened vigilance going forward.

“In the view of the jury, with respect to Spanier, and by their own admission, as to Curley and Schultz, these former leaders fell short,” the statement read. “And while we cannot undo the past, we have re-dedicated ourselves and our university to act always with the highest integrity, in affirming the shared values of our community.”

Emails show that the three men knew Sandusky, a longtime assistant to head football coach Joe Paterno, had been investigated by university police in 1998. They first decided to report the 2001 incident to child-welfare authorities, but then changed that plan. Instead, they agreed to talk to Sandusky, bar him from bringing boys on campus, and share the report with the president of Second Mile, the charity Sandusky started for vulnerable children.

One of Sandusky’s victims told jurors this week that Sandusky assaulted him in a campus shower in 2002.


Both Schultz and Curley also testified, although a prosecutor told jurors in her closing argument that they were not the government’s star witnesses.

“This has always been a trial about children, their well-being and welfare,” said Deputy Attorney General Laura Ditka, who prosecuted the case along with Patrick Schulte.

After Schultz and Curley failed to strongly implicate him — Curley testified that he couldn’t recall details of some conversations about Sandusky, and both men said they didn’t realize at the time Sandusky was abusing children — Spanier opted not to take the witness stand.

His lawyers argued that the government didn’t present any evidence that Spanier knew Sandusky was a child sex abuser or that the university president knowingly conspired to cover up a crime.

Spanier, who rose to national prominence as Penn State’s leader for 16 years, has maintained that he acted appropriately in 2001 based on the information he had at the time. He contends he was told by his lieutenants that Sandusky’s behavior with the boy in the shower amounted to “horseplay.”

After the verdict, longtime Spanier friend Gary Glynn left the courtroom with a grim expression. “Disappointed,” he said, declining to comment further.


Glynn, a retired investment manager from New York, had said earlier in the day that no matter the verdict, his faith in Spanier would not be shaken. “I just know if he had any idea what was going on, he would have put a stop to it,” he said.

The decision signaled what could be end to criminal proceedings, which began in 2011 when Sandusky was indicted for abusing children on and off Penn State’s campus, and Schultz and Curley charged with conspiring to cover up his crimes.

Spanier and Paterno were forced from their jobs. A year later in 2012, Spanier was charged with the same crimes as Curley and Schultz. After years of legal wrangling and appeals, the case against Spanier was whittled to child endangerment and conspiracy.

The case deeply divided the Penn State community and its board of trustees. Eight of nine alumni-elected trustees on the 38-member board — who have supported Spanier and have been critical of the university’s handling of the matter — attended the trial.

“I’m incredulous at the verdict,” trustee Al Lord said. “Not one victim attached Graham to this, and they still managed to come out with a guilty verdict.”

Trustee Bill Oldsey said a conviction could have huge ramifications for higher education administrations, who deal with sensitive matters all the time.


“This is going to be like a shot fired around the world,” he said. “If people of Graham’s caliber will continue to aspire to lead the great universities of this country, then we have to make sure in this age of accountability that there are protections from being wrongly accused.”

But he said he was pleased that Spanier was acquitted of conspiracy. “A jury of your peers and my peers found that no, there was no such conspiracy,” he said.

Elsewhere, reactions were mixed. State Rep. Mark Rozzi (D., Berks) called Friday’s conviction “a slap on the wrist” that also would leave some victims feeling disappointed that Spanier was acquitted of conspiracy.

“I’m sure that there’s a lot of Penn State victims out there today that are disappointed and believe that more of a cover-up was done,” said Rozzi, who has been an advocate for sex-abuse victims in the legislature. “They were probably hoping for more.”

On Penn State’s campus, the verdict seemed to have little impact. More than five years have passed since the scandal broke; few if any current students were around to recall it.

At the student union on Friday, many sat quietly unaware of the verdict — or even the case. Asked how closely he had been following Spanier’s trial, 19-year-old Justin Jarvis, a Virginia native, gave a blank stare.

“I’ve never even heard of that guy,” he said.