Chef-driven hotspots and cool hipster hangs get all the attention these days, but the Philly food scene is about much more than that.

The number of cuisines represented by all the restaurants, carts, snack shops and stands around the city is almost uncountable.

So if you want to take a trip through as many of them as possible, a ride on the El is the easiest way.

From the western edge to the northern tip, the Market-Frankford Line is surrounded by a huge variety of eating establishments, and you don’t have to walk more than a block or two from any station to sample an assortment of the best. Here are 17 suggestions, stop-by-stop, for where to go. 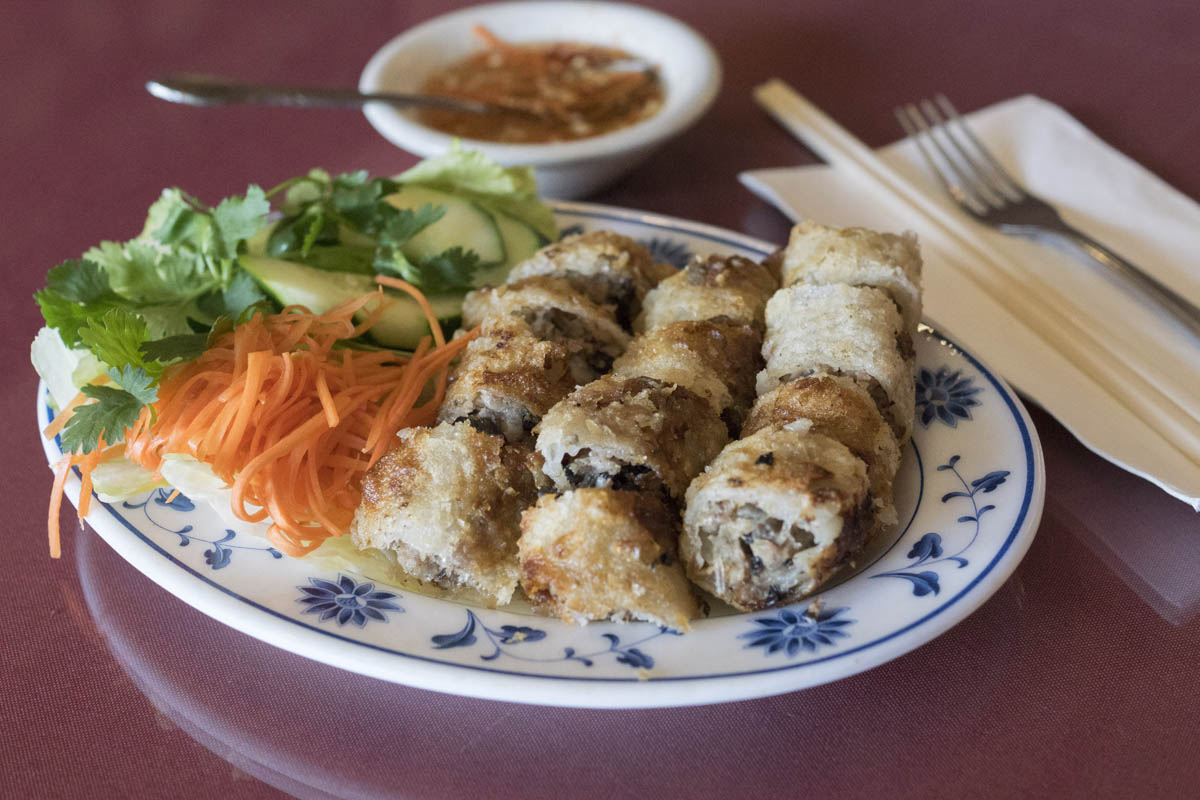 The Upper Darby neighborhood surrounding the El’s most westward stop is home to one of the most diverse restaurant clusters in the region. You can get everything from African to Dominican to Peruvian cuisine — and that pleases Little Saigon owner Hung “Edward” Nguyen immensely. Since narrowly escaping Vietnam in 1979 and opening his restaurant 10 years later, he’s watched the shopping district grow. The menu, executed by his wife Nancy Ngheim, has stayed mostly the same for 28 years, and customers are happy about that. The crispy, Northern Vietnamese-style spring rolls are a favorite; the restaurant sells more than 500 of them a week. 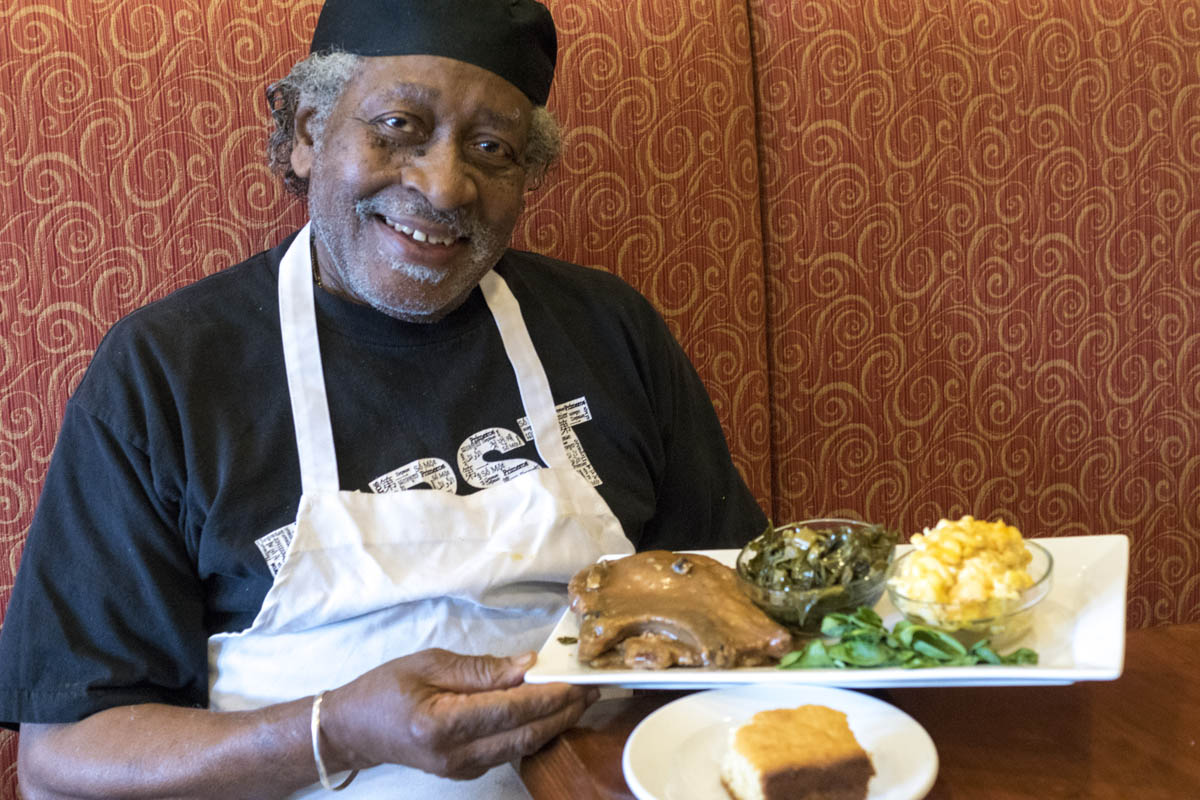 Two and a half years ago, when Sabrina Feggins wanted to open a Southern and soul food restaurant near the area of West Philly where she grew up, she turned to her parents — especially her dad, Levi Scott Sr. Scott had cooked for years at his brother’s 52nd Street spot (Scotty’s) and was interested in partnering so he had a better home for his booming catering business. Now he does both, treating customers at the small BYOB to his famous smothered pork chops, veggie-filled fish fries, sticky-thick corn bread and creamy mac ‘n’ cheese. 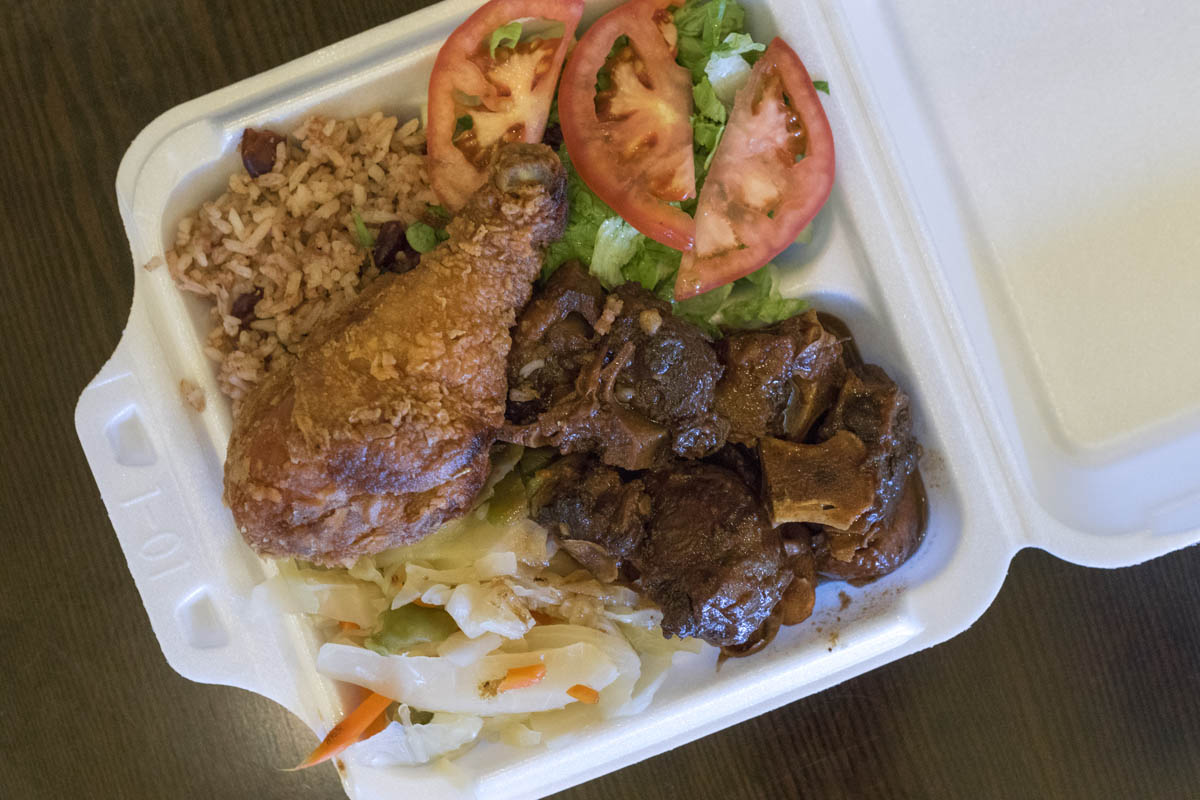 Saltfish fritters. No matter what else you order at the tiny counter over which Ann Etta’s food is proffered, make sure to add a pair of these light and salty cakes, which are taste like something a sea god might chow down on after a night of partying. Like most of the menu — jerk chicken, oxtail stew — they’re a staple of Jamaican cuisine. Since opening more than 20 years ago, Etta (aka “Miss Best”) has watched the community of her native country swell around her. “There’s lots of Jamaican restaurants on this block now,” she said, “and I love it.” 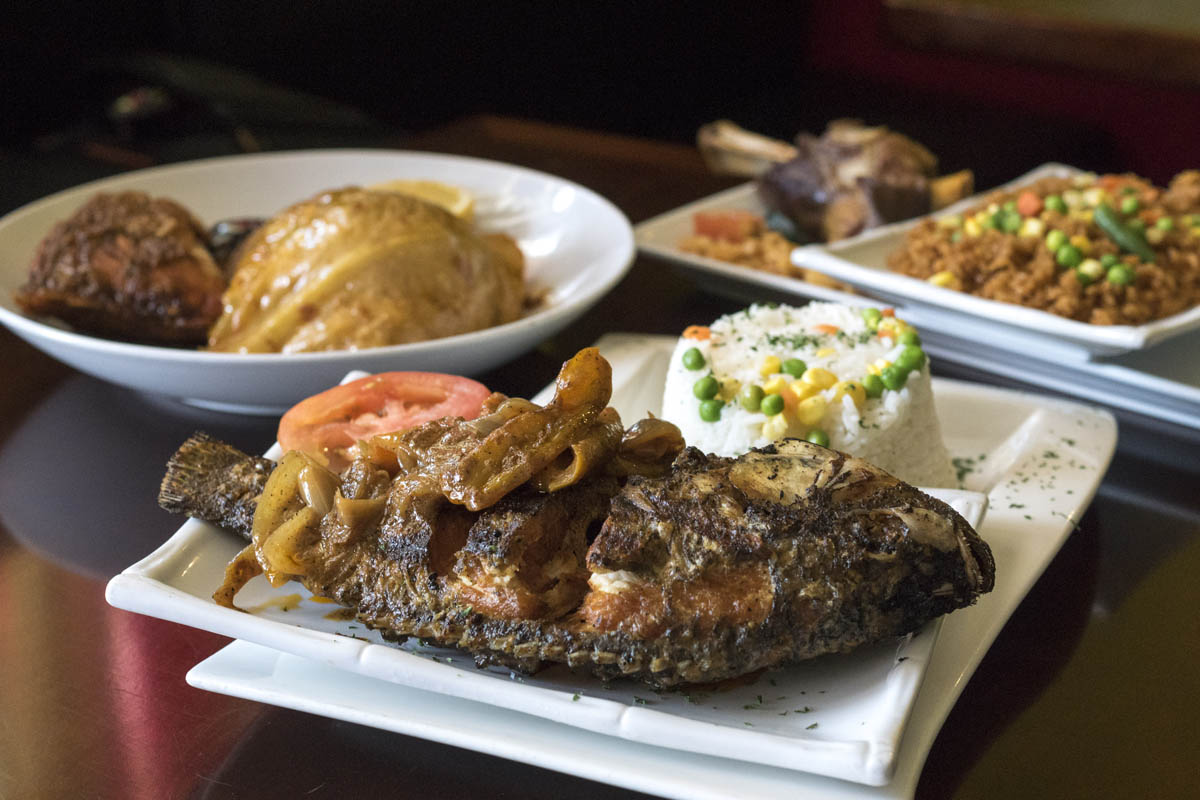 It’s a couple blocks walk from the station, but inside one of those strip malls oddly dropped in the middle of the urban street grid is a West African food experience well worth the trip. For the past decade, Senegalese chef-owner Youma Ba has run this cozy dining room, where the walls are as colorful as the lively customer stories that float by in both French and English. The thieboudienne is the biggest crowd pleaser, its crispy whole-fried tilapia covered in spicy tomato stew, but the marinated yassa fish also has its fans, some of whom swear by a BYOB combo of brandy plus red wine to go along. 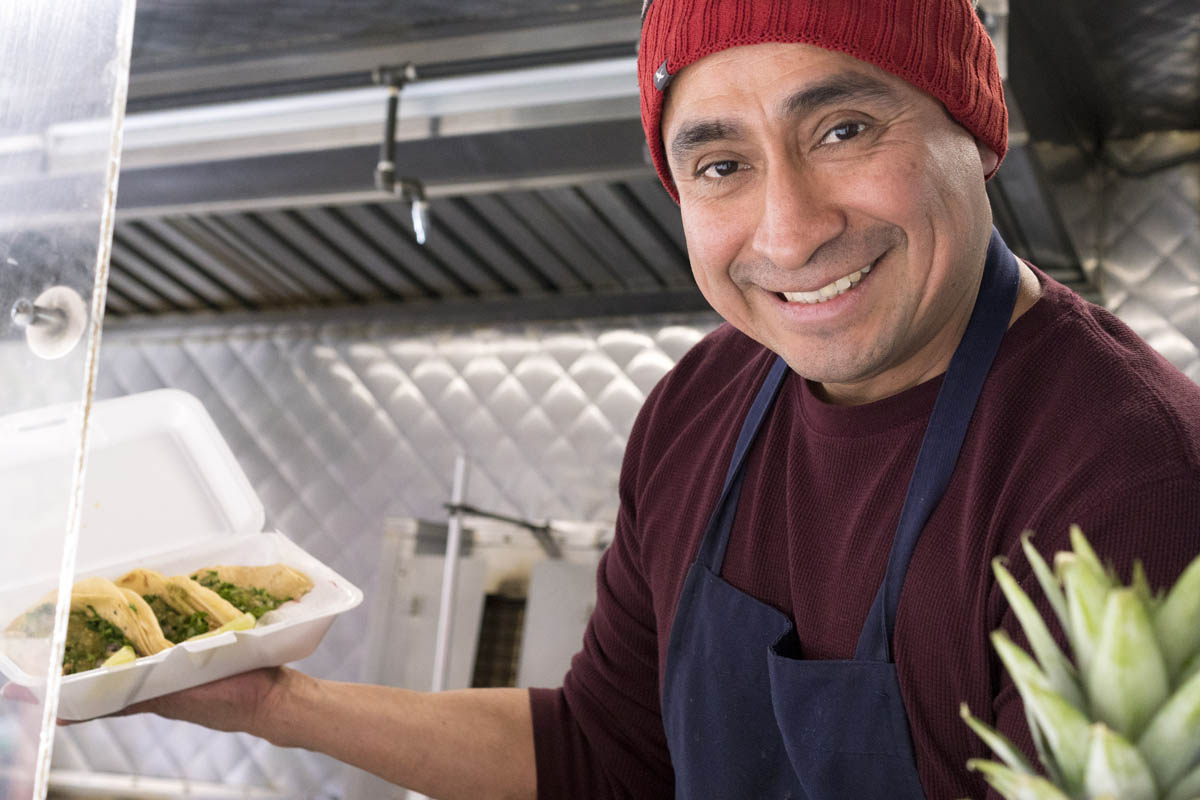 The Drexel campus food truck game was already relatively crowded when Puebla native Gabriel Lezama jumped in during the first half of 2015, but these standout tacos made him a quick favorite and earned him a permanent spot near 34th and Market. The truck posts up there from around 9 a.m. to 3 p.m. every weekday, feeding shrimp, chicken, pork and vegetable tacos (on your choice of corn or flour tortilla) to faculty, students and commuters passing by. You might also catch a second Dos Hermanos truck, run by Lezama’s brother, at various other locations like the Porch at 30th and festivals throughout the city. 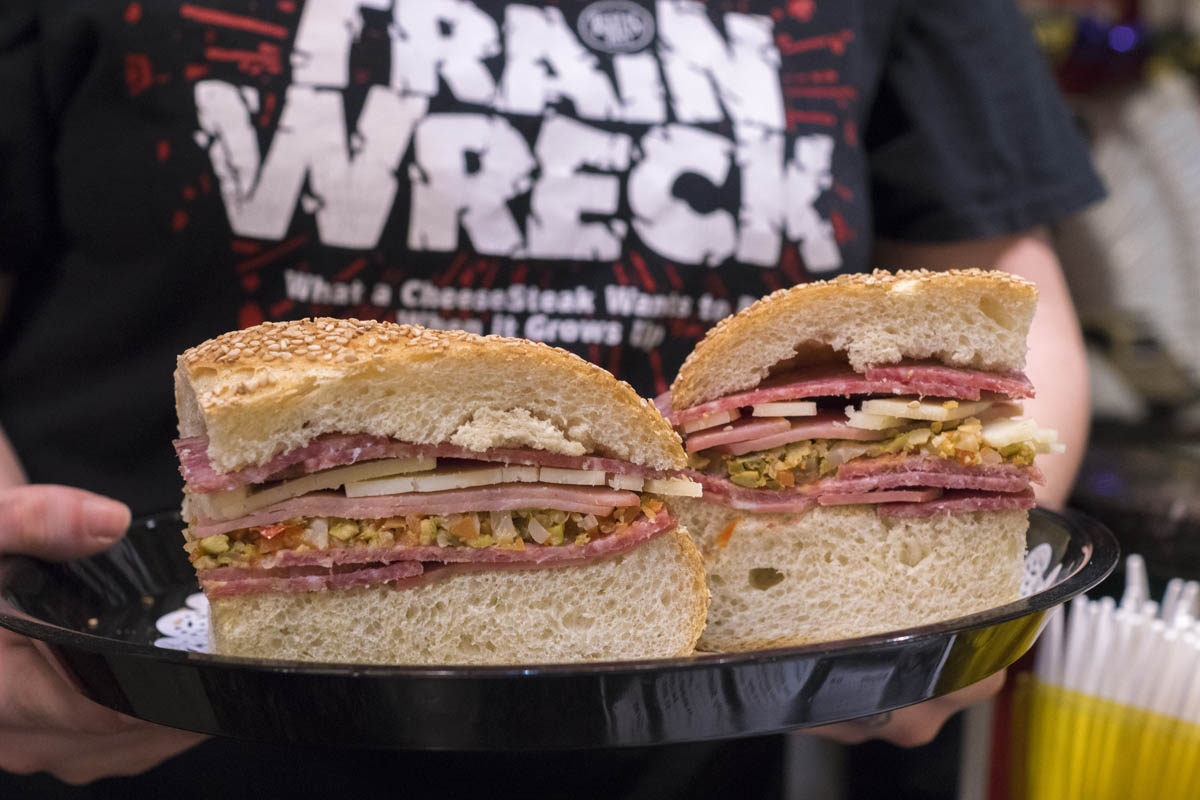 Compared to the always-busy Reading Terminal Market stand, this outpost of Bill Beck’s counter-service cafe is a much easier way to get your NOLA fix. The cuisine is just as authentic — alligator sausage shipped up from Louisiana, spicy gator gumbo and muffalettas as high and thick as your head — but the crowds rushing through to make Amtrak and Regional Rail connections are way less intense. For a meal that is intense, try the Train Wreck, Beck’s signature Philly-meets-New-Orleans sandwich that’s half po’ boy, half cheesesteak. Pro tip: Every other day, the kitchen makes hot, sugary beignets. 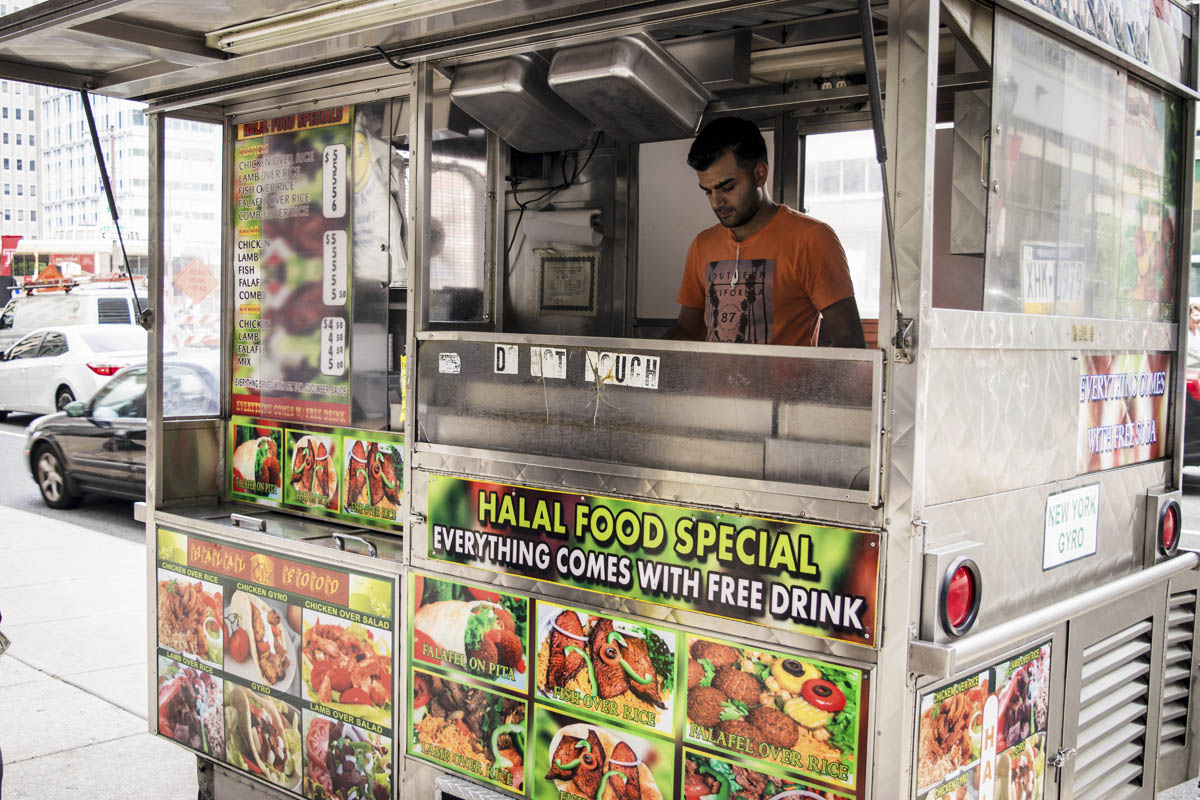 A native of northern Pakistan who was raised in Philly since he was three years old, Kashif Ahmad owns one of the earliest “halal carts” to show up on the streets of Center City. Opened by his older brother back in 2008, the mobile vending operation is open from around 8 a.m. to 3 p.m. every weekday, serving both lunch and breakfast to the crush of municipal and office workers in the area around Love Park. Ahmad offers various Middle Eastern platters, but he innovates new specials often, adding variety in a successful attempt to differentiate himself from other, similarly-branded carts. 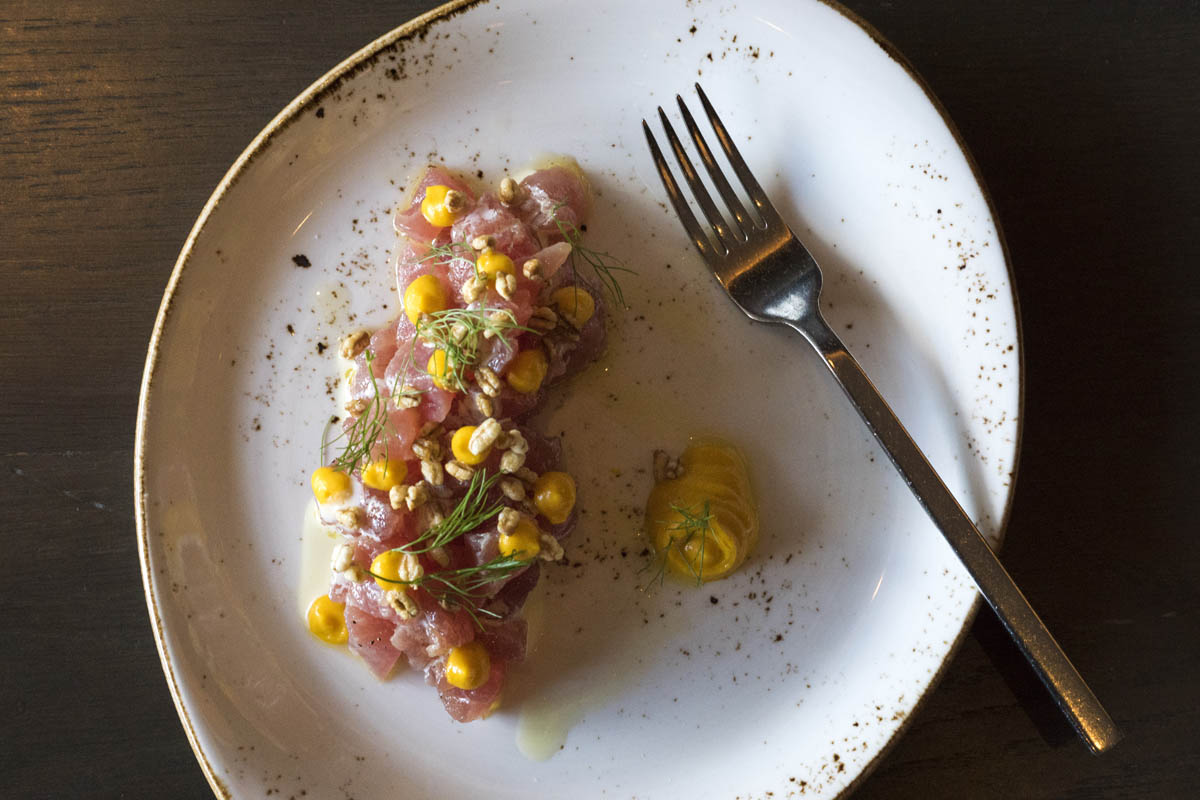 Somehow, smack in the middle of the Convention Center tourist zone, the Loews managed to create a hotel restaurant that is actually patronized by locals. Maybe it’s the light streaming into the high-ceilinged dining room from the rounded window walls, or perhaps the service, which is professional but not obsequious. Or it could be the food. Chef Thomas Harkins has cooked in this region for decades, and his menu — from exceptional pork loin eggs Benedict at breakfast to grilled octopus with charred green tomato at dinner — is filled with American classics given just enough extra edge. 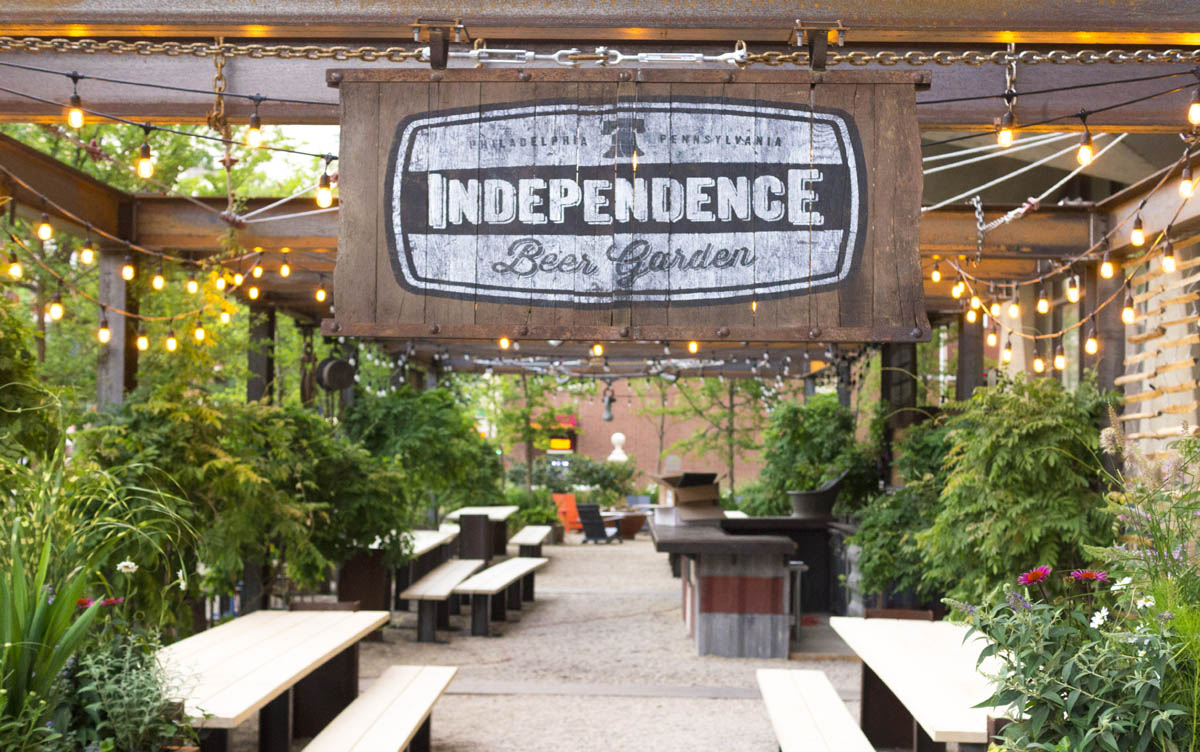 Most of the time, Philadelphians don’t give the Liberty Bell a second thought, and even poke fun of families who stand in line for hours to gape at a piece of cracked metal. This sprawling outdoor drinking establishment right across from Independence Mall, however, is a perfect place to contemplate its place in our nation’s history. Ruminations on the founding of America are helped along by the gorgeous flora planted each season among the garden’s various seating areas, and given extra fuel by a large selection of craft beer and chef Michael Schulson’s menu of interesting (and veg-friendly) bar bites. 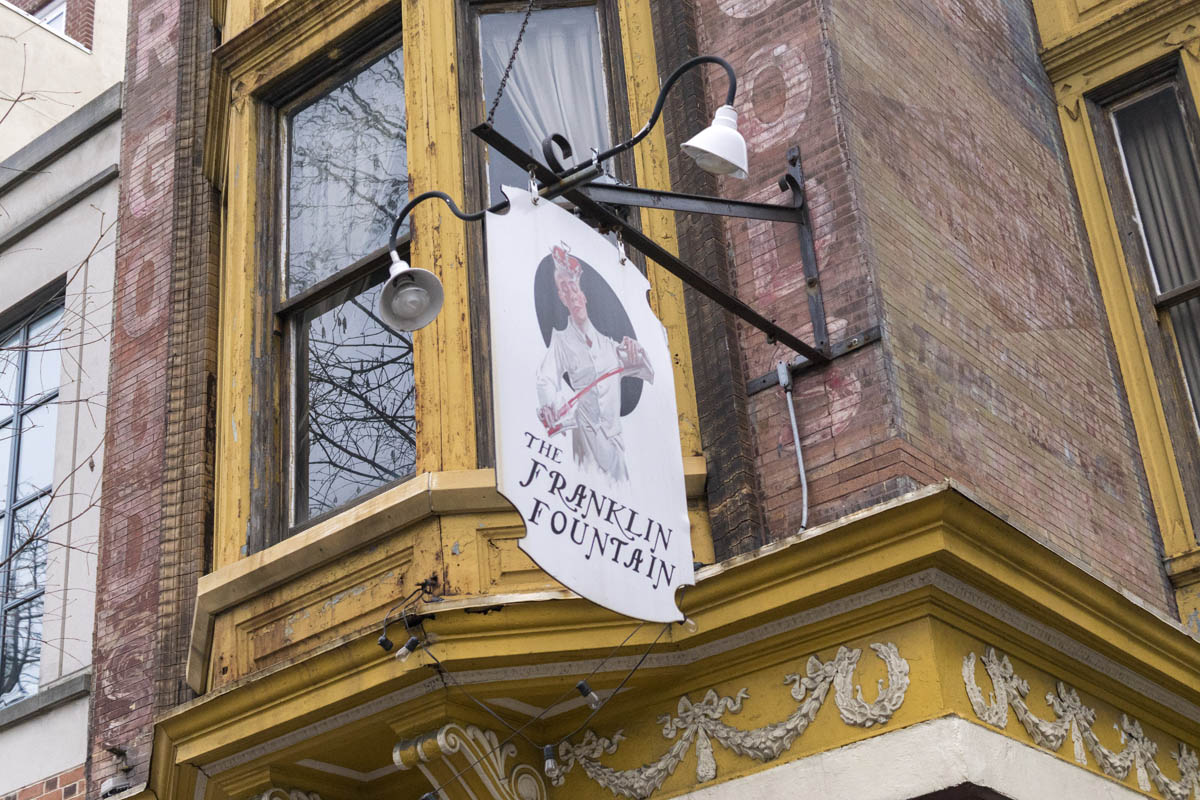 Get Ryan and Eric Berley started, and they can spin a yarn of Pennsylvania food history that lasts longer than an awkward Thanksgiving dinner with the fam. But the brothers’ extensive knowledge is put to good use at their historically accurate ice cream parlor, which will have you swearing that, of course, “the old fashioned way” is “the most delicious way.” Ice creams made with real vanilla bean, spices or fruit — or sometimes, vegetables — are served by the scoop, in decadent sundaes and in Philadelphia egg creams (made with no actual egg). Don’t miss the chance to pop into the Berleys’ Shane Confectionery right next door — if not for some actual candy, then the eye candy of its meticulously restored interior. 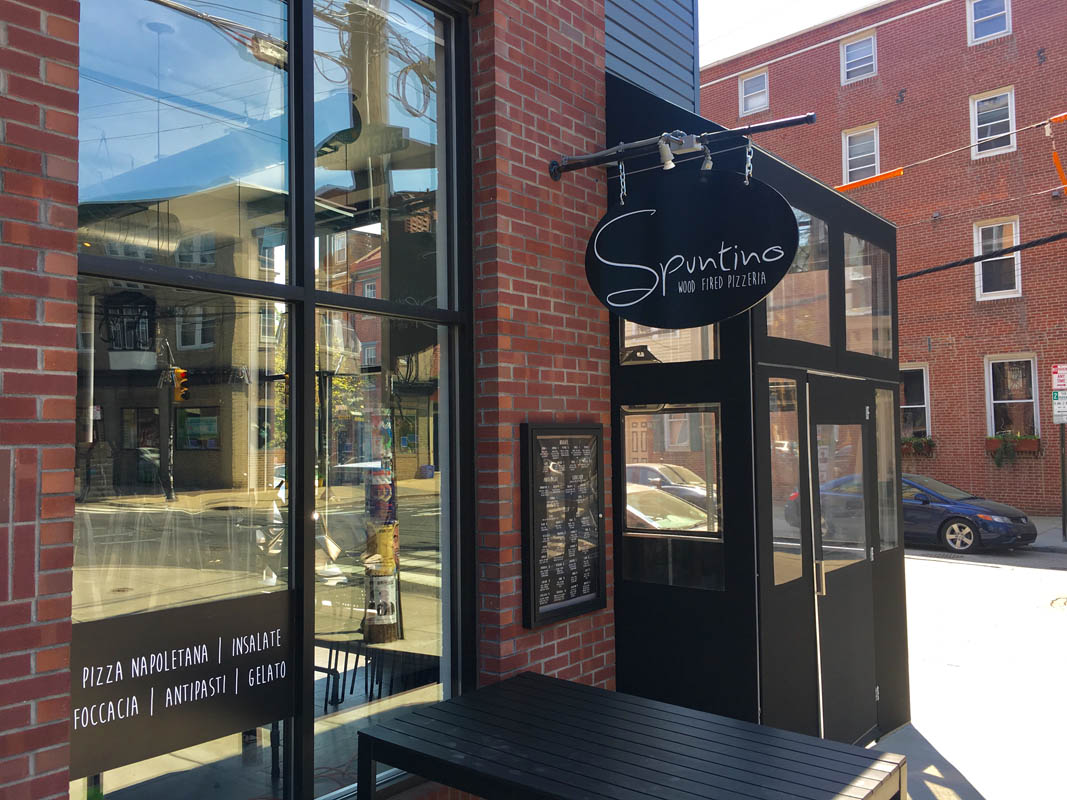 When the Carollo brothers brought a branch of their successful Doylestown pizzeria to Northern Liberties in late 2015, eyes rolled. Did Philly really need another place to get wood-fired Neapolitan-style pies? Apparently, yes, especially one so accessible from the El. For the quality of ingredients — many imported from Italy — and the perfection of the prized “leoparding” char on the crust, prices are relatively low, and the spacious interior is sleek but welcoming. The whole vibe is not about being the best, it’s just about being great. 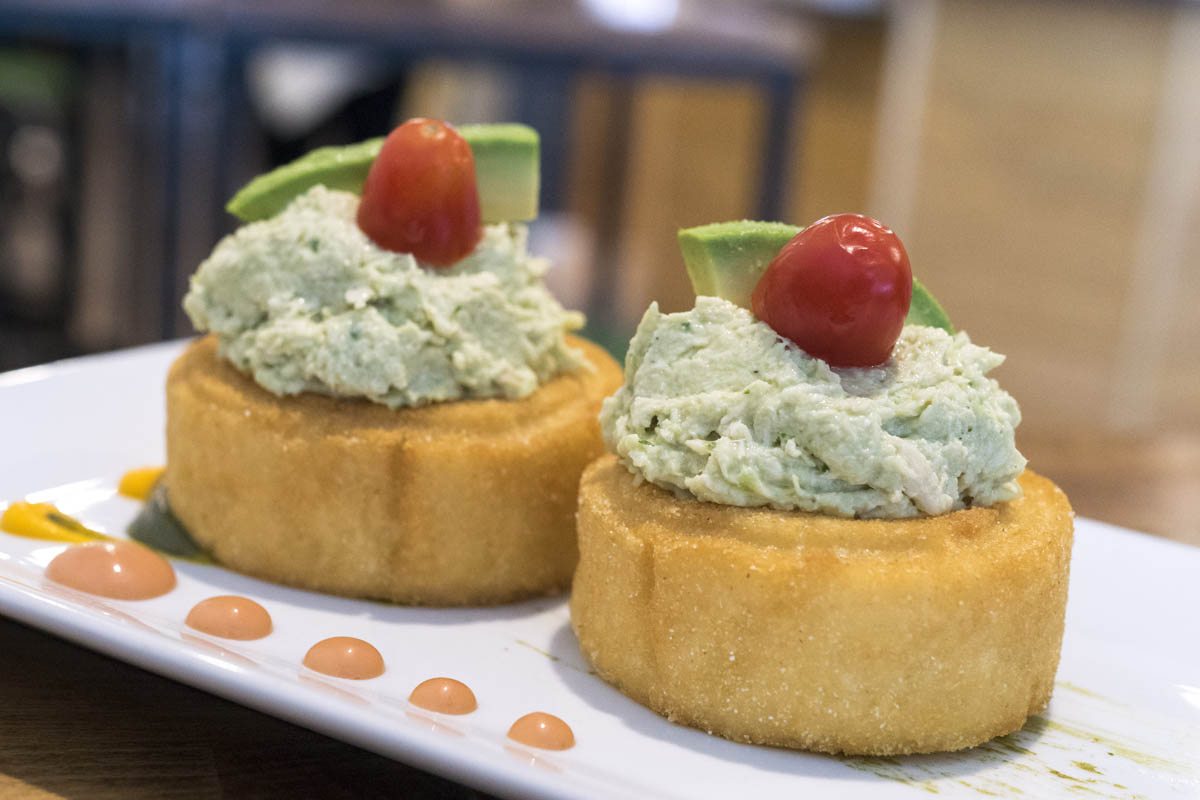 Owner Manuel Gomez and his family hail from Venezuela, and arepas are a traditional Venezuelan food, but what’s served at his small shop tucked directly beneath the El is definitely not traditional. Instead of flattening the cornmeal cakes into rounds and splitting them in half to hold fillings, Gomez came up with the idea to form them into cup-like shells — or “tarts” — that are then piled high with toppings. The form is not only easier to eat (less messy, anyway), it’s also less likely to get dried out. With mounds of shredded chicken whipped with avocado, the reina pepiada is one of the spot’s all-time best-sellers. 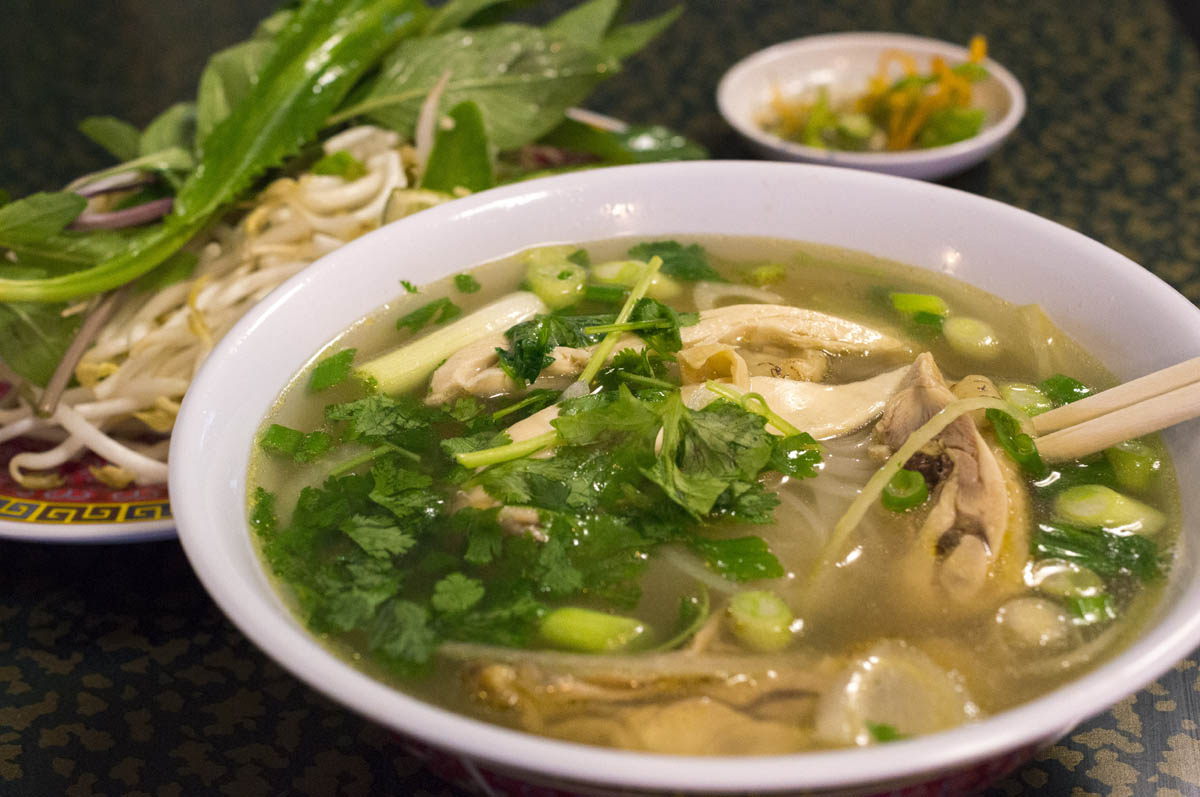 Between run-of-the-mill convenience stores and brand-less doughnut shops, next to buildings in various states of repair or decay, there’s a surprisingly robust collection of Vietnamese pho houses beneath the El in Kensington. This is one of the only with a full bar, which means the atmosphere is more lively and the decor more colorful than many of the others. The nice environs don’t translate to any flavor sacrifice — the owners also run the poultry shop next door, so their pho ga (chicken pho) is tops. Don’t overlook the plate of muôí tiêu (salt and pepper) served on the side with your bowl — a squeeze of lemon juice makes a great dipping sauce for meat fished out of the rich broth. 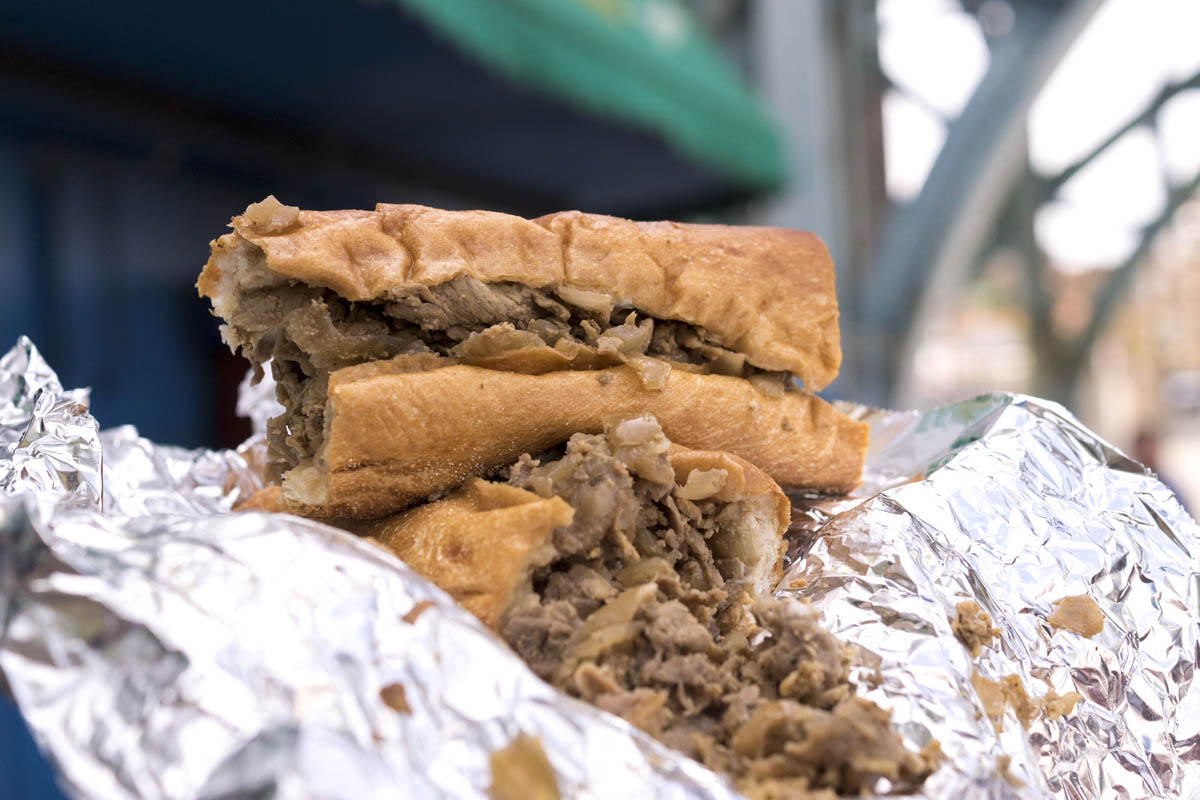 It’s a simple fact: Cheesesteaks taste better when you eat them standing up, surrounded by noise and dust and the gritty heartbeat of the city. No other explanation for the pleasure derived from inhaling one of the meat-and-cheese creations served at this cracked and streaked window — although the $5.50 price tag definitely helps. Owner Jimmy Resuli has run the joint for more than eight years now, and honed his recipe: Aversa roll, Liberty Bell meat, half-inch-square onions fried up nice and soft. If you do order a large, be prepared for a jaw-dropping two-foot long adventure in chowing down. 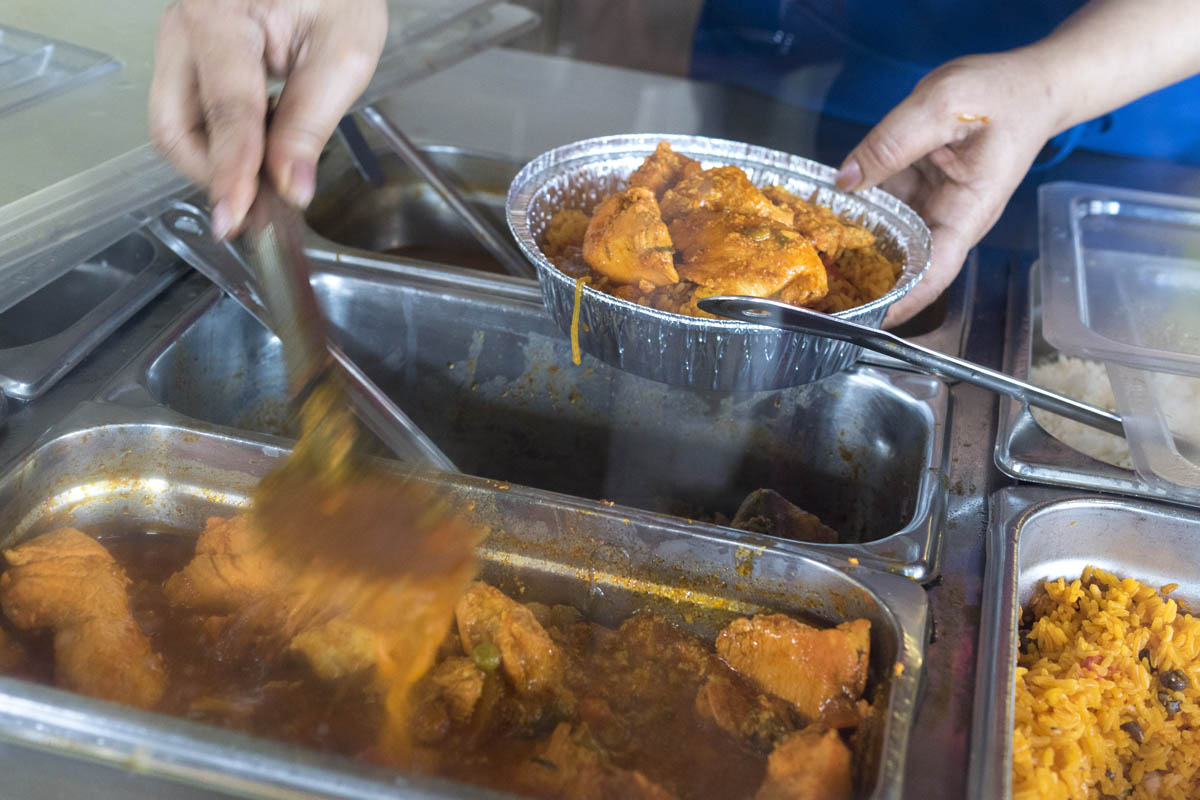 It’s worth traveling a few blocks away from the station to this Frankford Avenue corner, where a rotating case of Dominican women friends works a large open kitchen fronted by a couple of counter stools. Order from the steam table on the left for one of the heartiest of all chicken stews (pollo guisado) served over yellow rice that’s as flavorful as the meat. Or pick from the fried foods section on the right, where giant pork chops sit crisping on the bone, and pastelitos pockets glow golden around their stuffing. Do note: Even though Google has the spot labeled as a “fried chicken restaurant,” it’s definitely something more. 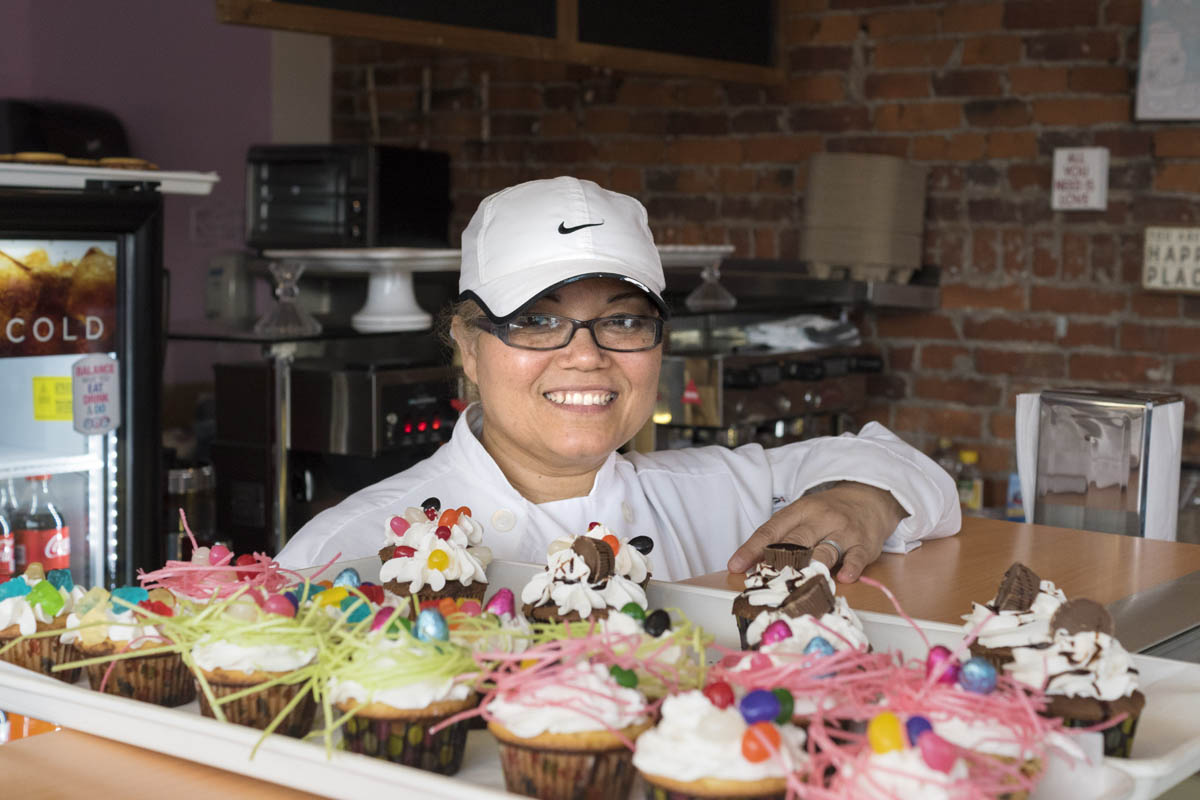 Around a year ago, Puerto Rico native Marisol Lozada decided she wanted to turn her pastry talent into a full-time gig, so she found a spot, painted the facade bright pink and launched her bakery. Within a couple of weeks, the wiring went awry, leaving her without lights and no choice but to shut back down. Three months later, she and husband and co-chef Miguel Diaz are finally back in business, baking up a storm of cupcakes, custom cakes and quesitos, flaky Puerto Rican pastries with a sweet cheese filling. 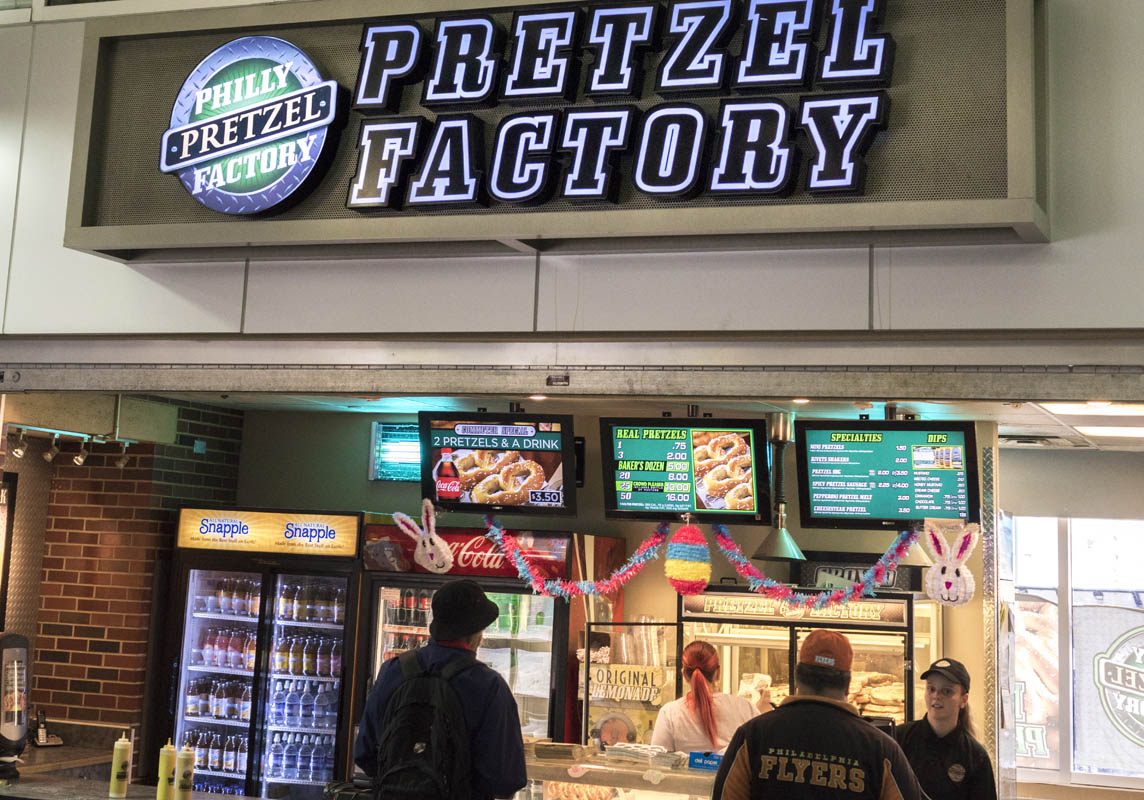 The area around the MFL’s northern terminus is almost the antithesis of its western end. Instead of unprecedented culinary diversity, eating options are confined to various takes on fast food fried chicken, donuts and whatever the local dive bars are serving. Which is why it makes a ton of sense that a Philly Pretzel Factory was installed inside the SEPTA lobby. Since it’s so busy — transportation workers say it’s rare there are no customers at the counter — it’s a very good place to pick up a hot and fresh example of the city’s classic street snack.