PHILADELPHIA – The smell of fresh hardwood – northern hard maple wood, to be precise – was immediate, and symbolic.

For many reasons, the scents, too, were cause for a justifiably celebratory mood – the byproduct of the rallying of a neighborhood; the culmination of hard, heartfelt work; and the strengthening of relationships within a community.

Thursday afternoon, with the city’s highest-ranking government officials in attendance, along with plenty of local kids and residents, the Strawberry Mansion PAL Center officially opened its doors. The facility, housed in the former LP Hill Elementary School on the 3100 block of Ridge Avenue, is already expected to serve over 430 children, and has been outfitted to provide a variety of athletic and educational programs through the Police Athletic League of Philadelphia.

Perhaps the hallmark feature of the Strawberry Mansion PAL Center, one of the nearly 20 situated in some of the city’s most volatile areas, is its brand new 3,500 square-foot basketball court. The floor – made from the same materials that form the playing surfaces at the Sixers’ training complex in Camden, and at The Center – was funded by a gift from the Harris Family Charitable Foundation, which helps carry out philanthropic projects initiated by Sixers’ managing owner Josh Harris, and his wife, Marjorie. 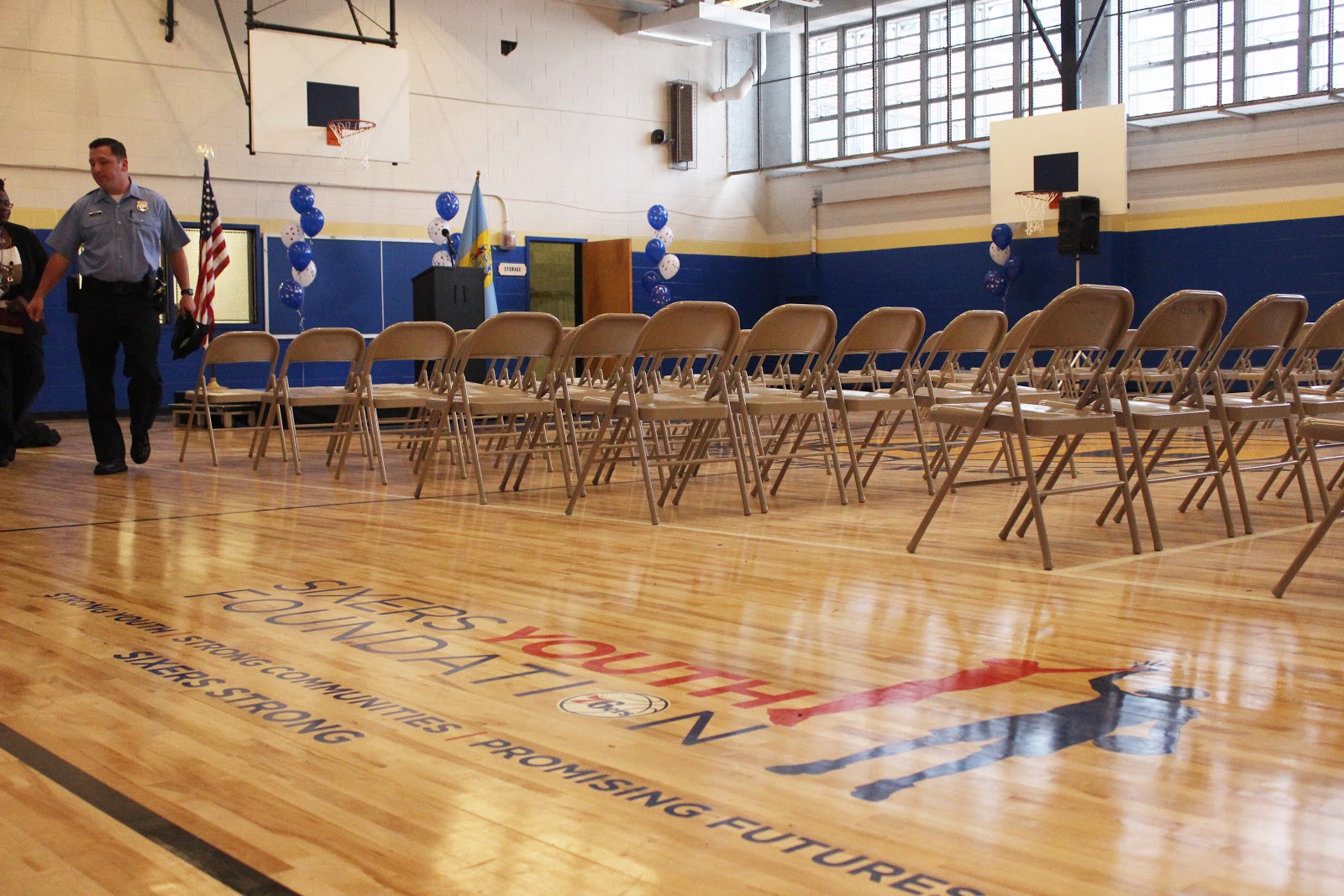 “The chance to touch 400 lives and give opportunities to kids that don’t always have them is amazing,” said Harris, who, along with the Sixers’ ownership group, purchased the franchise six years ago. “I’m just happy to be able to do it, and I feel a responsibility. It makes me really happy to be part of this.”

Supporting the Police Athletic League of Philadelphia has been a focal point of the Harris Family Charitable Foundation, which in August of 2015 made a $3.5 million contribution to the organization. 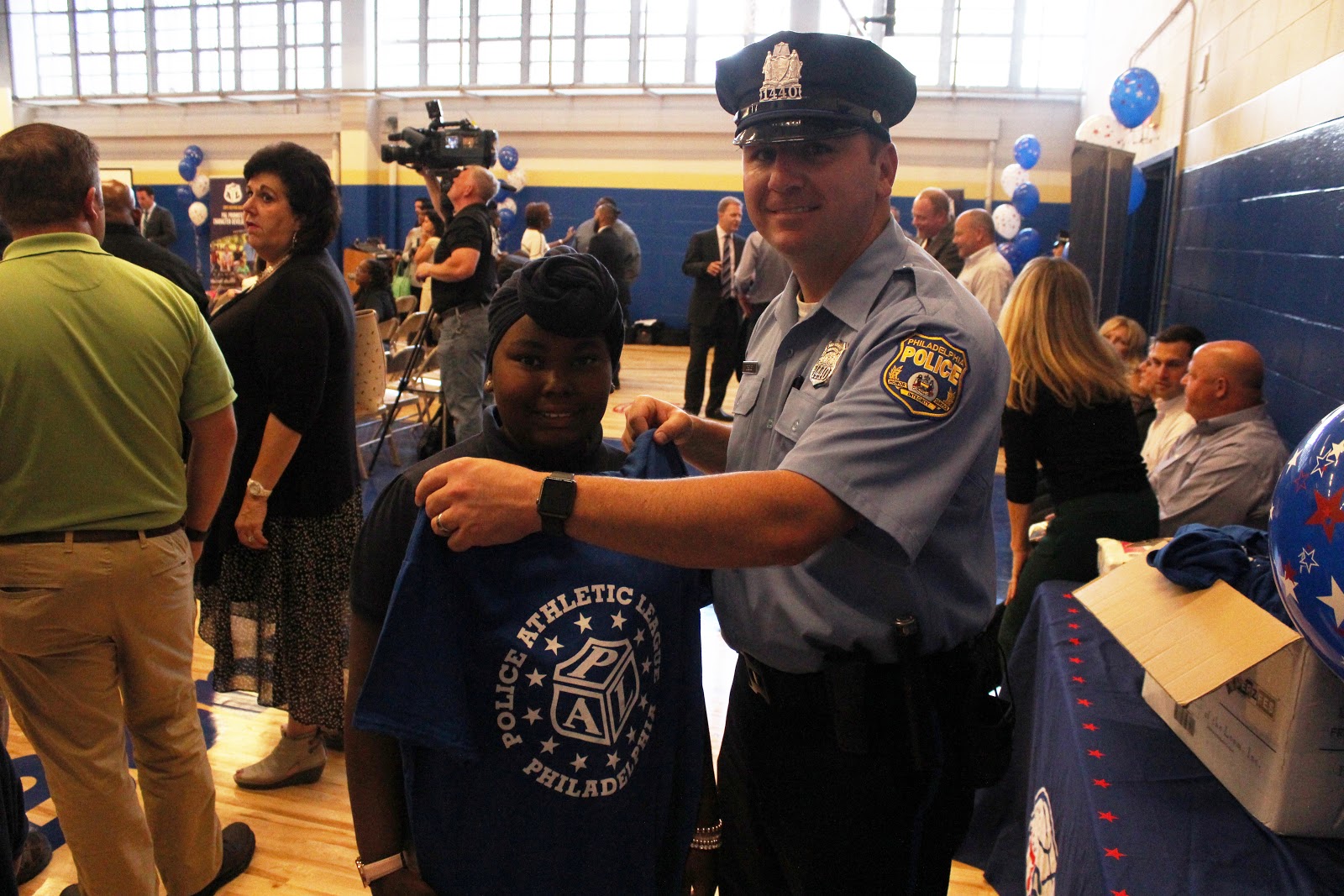 “The police and communities, in some cases, aren’t getting along,” Harris said Thursday, as he explained the importance of backing PAL. “A lot of times, it’s miscommunication and mistrust. There are a lot of great people with the police giving their hearts to this, and want what’s best for the community. The ability to bring the police and community together is really important.”

The Harrises, with five children of their own, also believe in the power of sports to implement change. Josh and Marjorie were among several prominent guests to address the standing-room only crowd during Thursday’s hour-long ribbon-cutting ceremony. Their brief address revolved around the role that hope can play in young people’s lives. 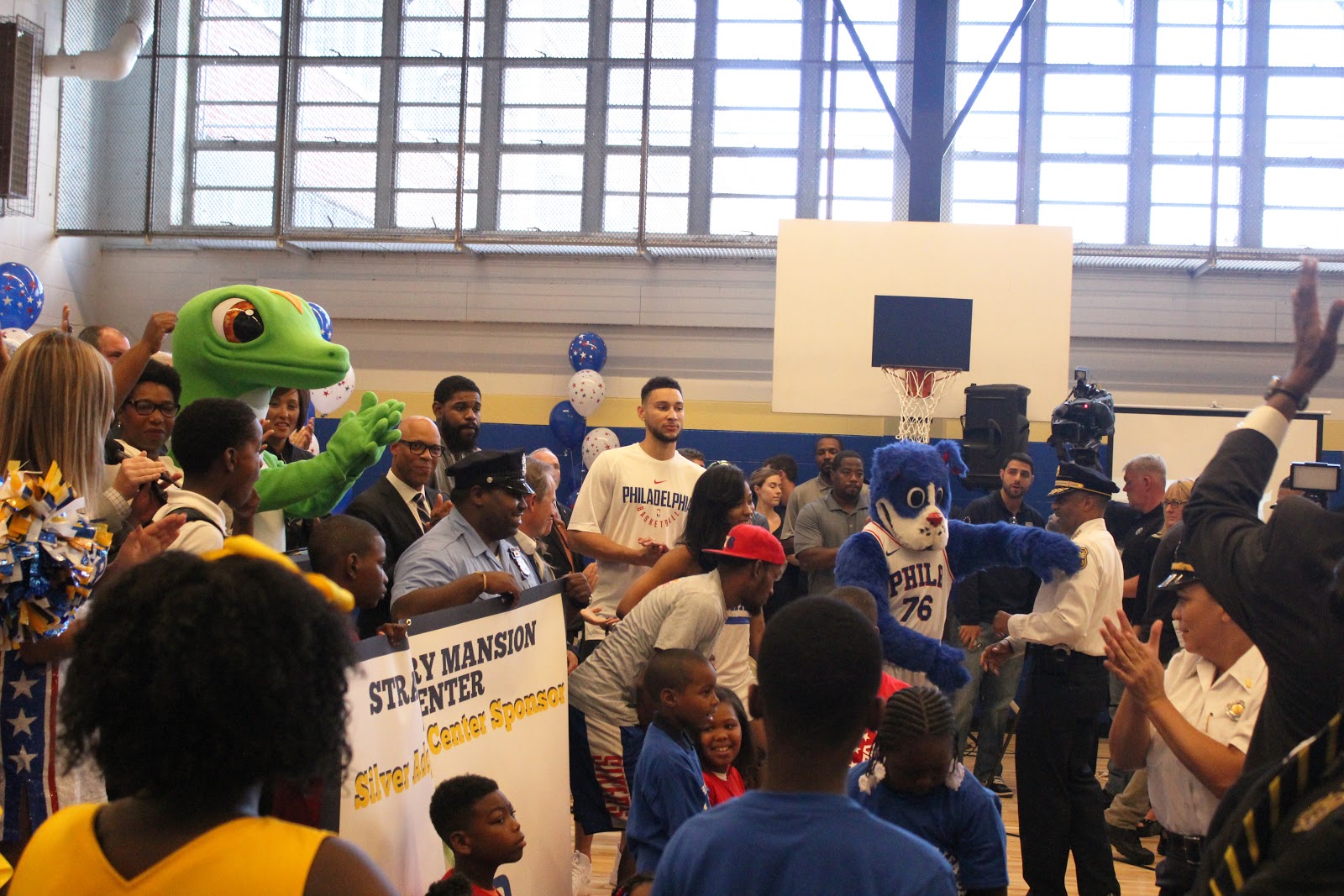 “When you know there are people rooting for you, I think it helps you see the way, it helps you persevere,” said Marjorie Harris. “If no one’s behind you, how are you going to make it?

“I believe the most important message to the community today is that there are people out here who care about them – the adults, the children. If they succeed, we succeed. I think it’s a pretty simple equation.” 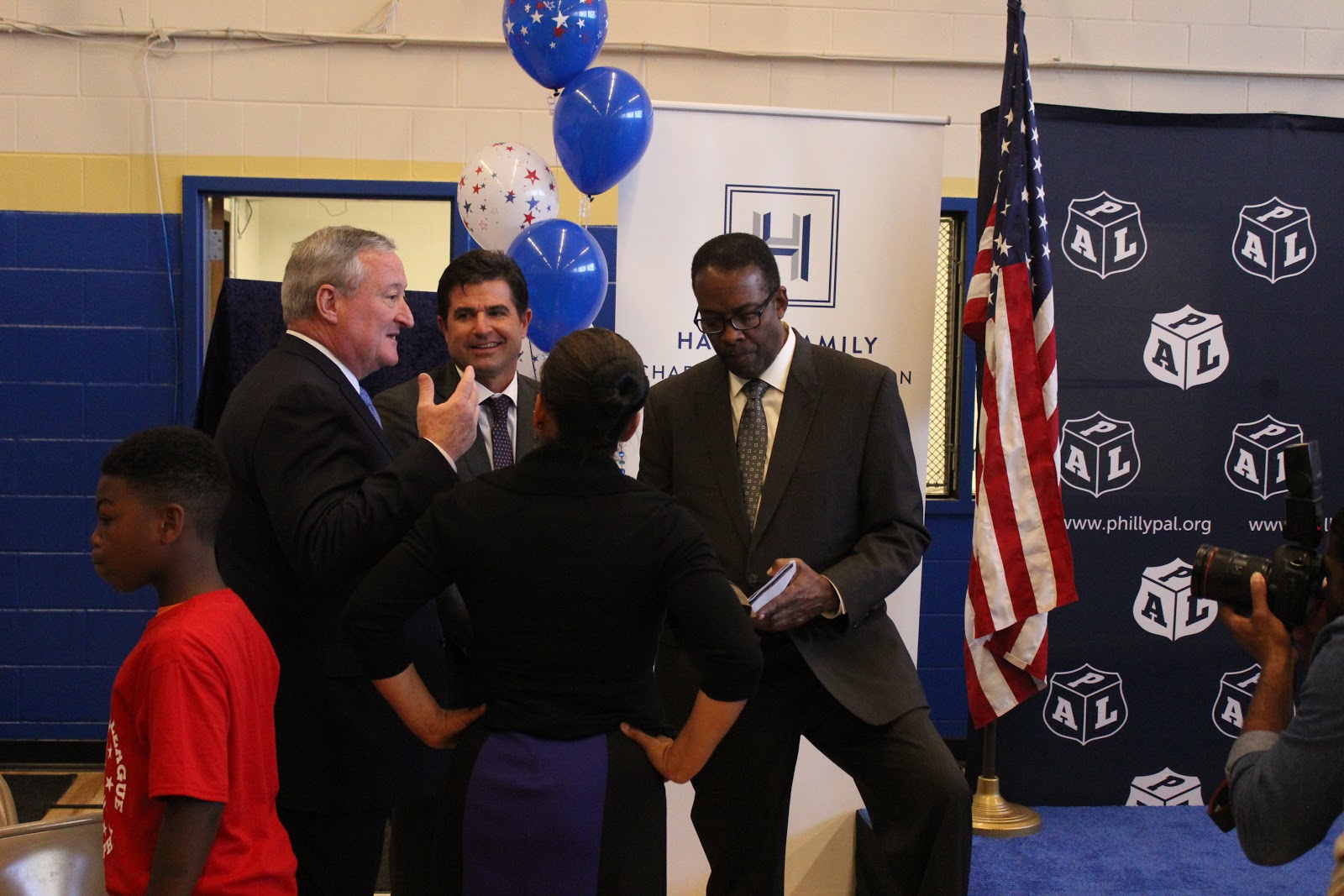 The group, through individual remarks, collectively stressed the value of having a PAL Center located in the heart of Philadelphia’s second-most violent police district, and praised parents, community leaders, and area business for banding together to repurpose a school building that was shuttered four years ago.

From that point forward, there was a push to bring PAL to the site.

“I especially want to thank the Sixers for one particular reason – you made sure [the court] was hardwood, and not some other surface,” he joked, drawing laughter and applause. “It’s a beautiful floor. We can maintain this forever. Our children deserve no less than the best, and our kids are getting the best now.”

Upon the conclusion of Thursday’s program, several dozen of those children had the chance to break in the court, with the help of some pretty talented hoopsters. Ben Simmons and Amir Johnson were on hand, taking part in a clinic led by Todd Landrey, the director of Sixers Camps. 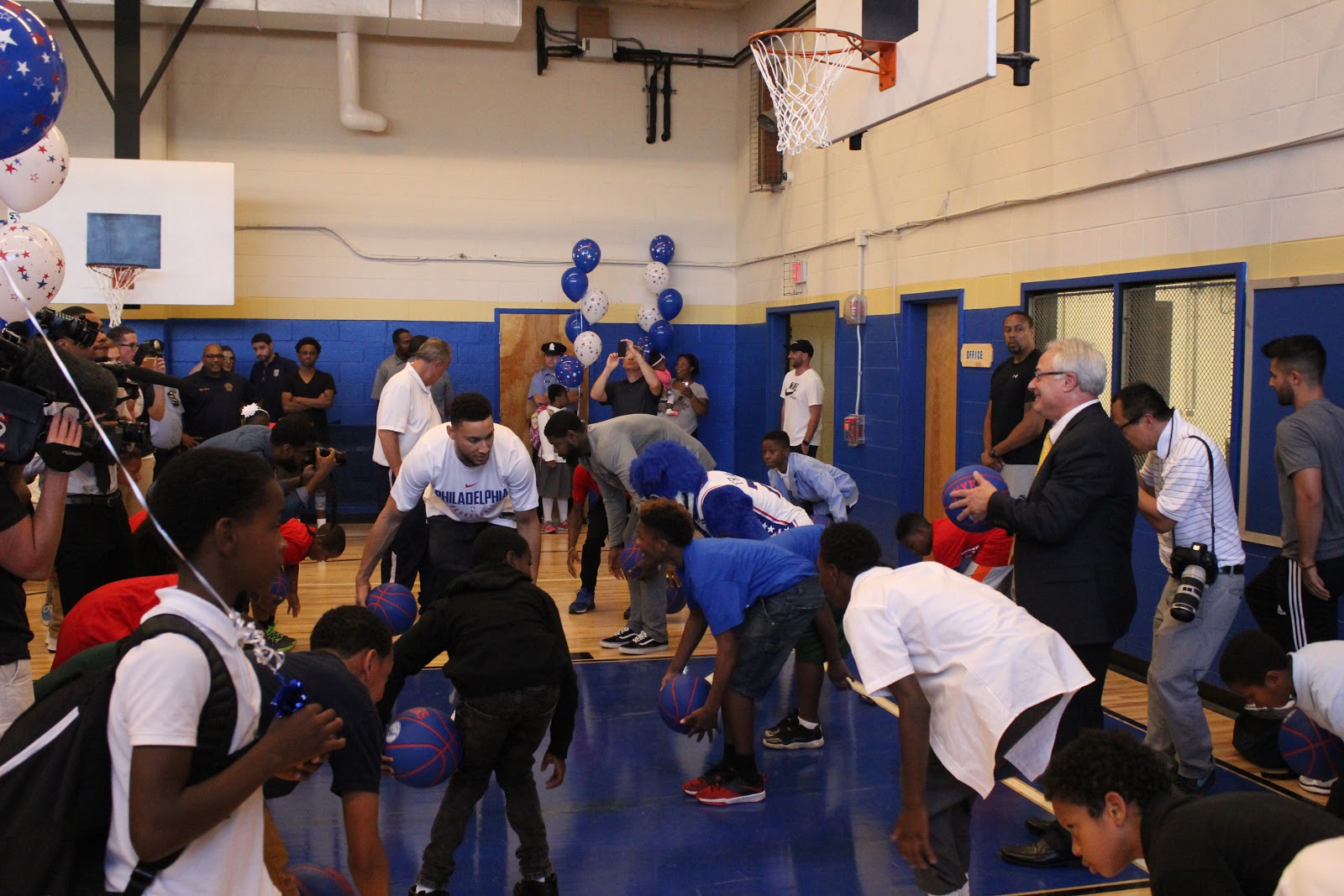 Not only is Simmons eager to play this season after missing last year with a right foot injury, he’s also looking forward to becoming a positive influence in Philadelphia.

“Seeing these kids happy, it’s awesome,” said Simmons, the No. 1 pick in the 2016 draft. “Just to know that they have our support, it’s not just them. I definitely want to come back here in the future and help out. I look forward to building with them.”

Johnson, meanwhile, wasted no time getting involved in the Sixers’ community cause. The 13-year vet signed as a free agent just two months ago. 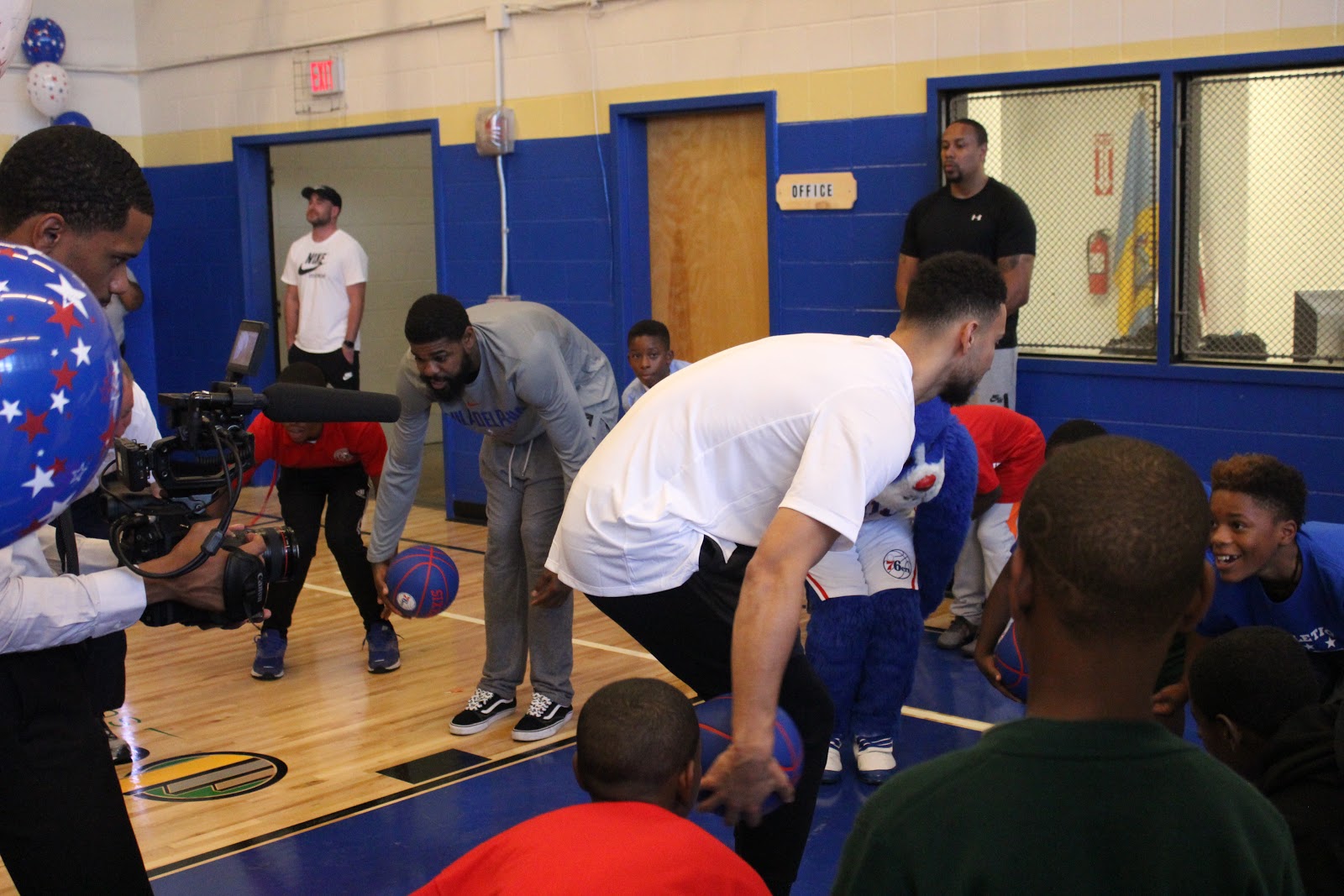 “It’s a beautiful thing, what they’re doing here with PAL to help inner city kids to keep them off the streets,” said Johnson, who added that extracurricular activities helped him out when he was young. “To have two of us here, and to have this facility, it’s just an unbelievable thing.”

Laying down the court at the Strawberry Mansion PAL Center represented the first phase of the Sixers Youth Foundation’s court renovation initiative. Next up in 2018 will be the outdoor court at the John Fr. Hartranft School in North Philadelphia.