CAMDEN – Imagine yourself an amateur basketball coach, or maybe an aspiring one, and the person responsible for leading your local NBA team offers you the chance to soak up a a couple hours worth of wisdom about a highly competitive industry.

You’d probably have some interest, right?

You wouldn’t be alone, either.

Tuesday night, at the 76ers’ training complex in Camden, New Jersey, attendees registered by the hundreds to hear Brett Brown share stories about his professional path, and to get an up-close look at what the 56-year old has made his life’s work – teaching by coaching hoops.

This year’s ‘Coach the Coaches’ clinic drew the biggest turnout yet of the three that Brown has hosted since joining the Sixers in 2013. He’s come to view the annual event as an obligation of sorts, his way of showing appreciation for a fraternity, game, and town.

Brett Brown thanks over a thousand “coaching brothers and sisters” for coming to tonight’s Coach the Coaches event in Camden. pic.twitter.com/BrGaS2gNRI

“I think the responsibility of it, the ability to help others resonates,” Brown told a group of reporters. “When I walk out here and see this volume of traffic, [that] is the message.”

Over the course of Tuesday’s two-hour session, Brown held court on the main floor of a packed Sixers’ practice gym, which was ready to accommodate the sizable turnout. Rows of bleachers flanked one side of the hardwood, while folding chairs bordered the opposite sideline and two baselines. 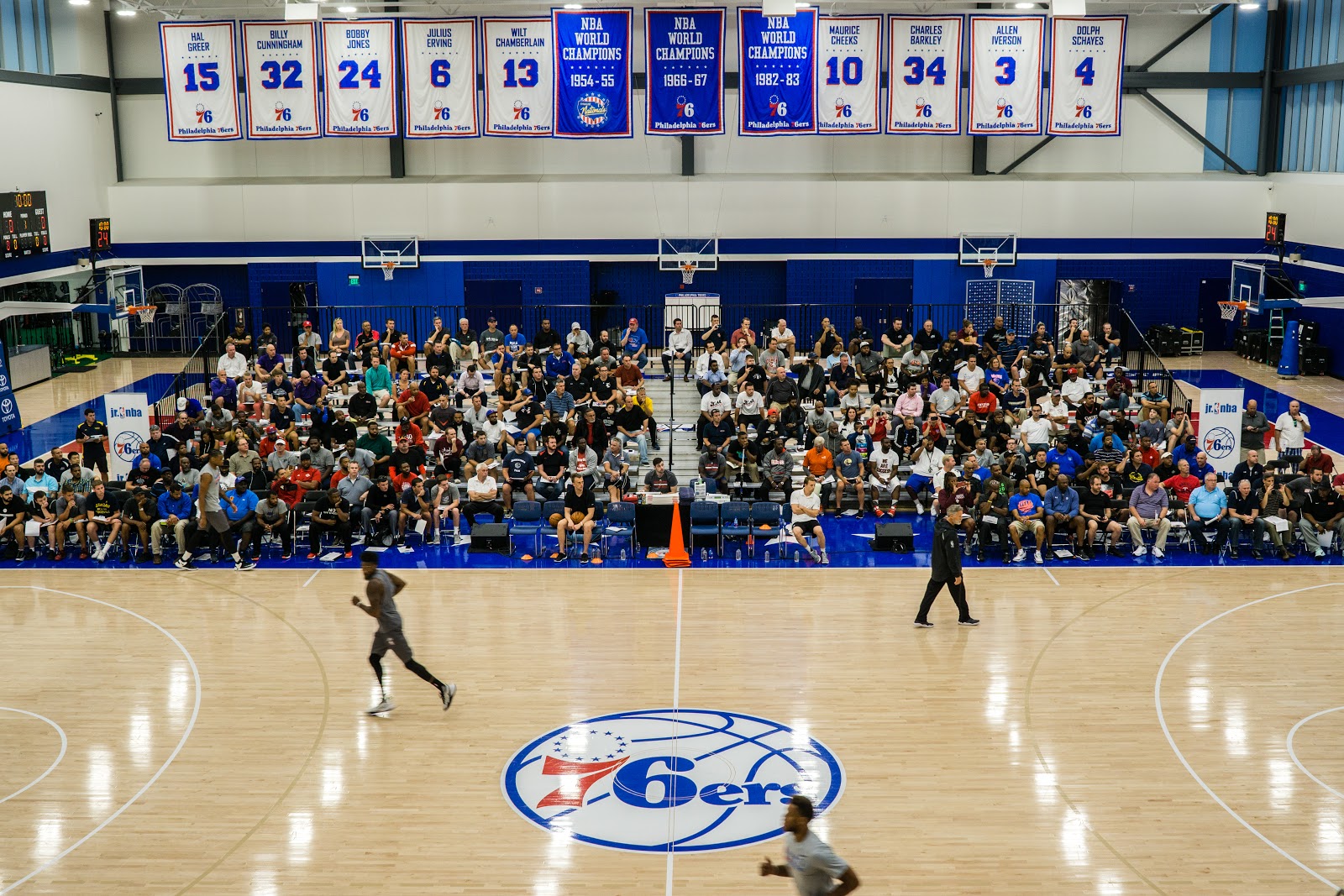 The evening consisted of ten 10-minute periods, each one dedicated to a different subject. The topics ranges from stretching drills tailored for on-court movements, to some of the more holistic elements of coaching, like infrastructure and culture. 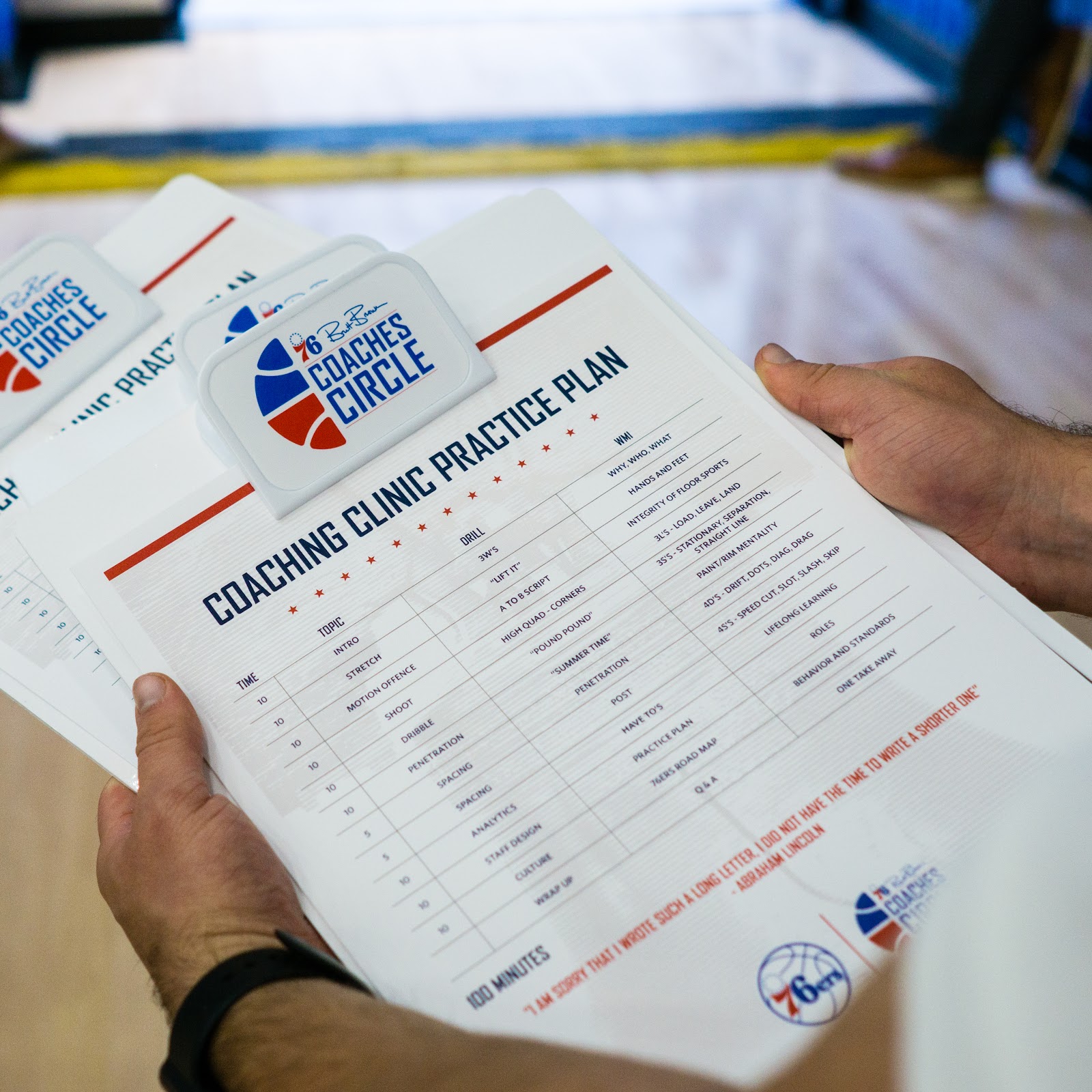 Brown was meticulously involved in mapping out just about every aspect of Tuesday’s program. He gave input on how the court should be laid out, selected the type of card stock paper that the clinic’s practice plan was printed on, and chose the Abraham Lincoln quote that was highlighted on the practice plan sheet, too. He cares about the night that much.

Based on feedback from past ‘Coach the Coaches’ clinics, Brown decided to implement one significant change this year. For the first time, he sought the assistance of members of the Sixers’ roster, and his staff. 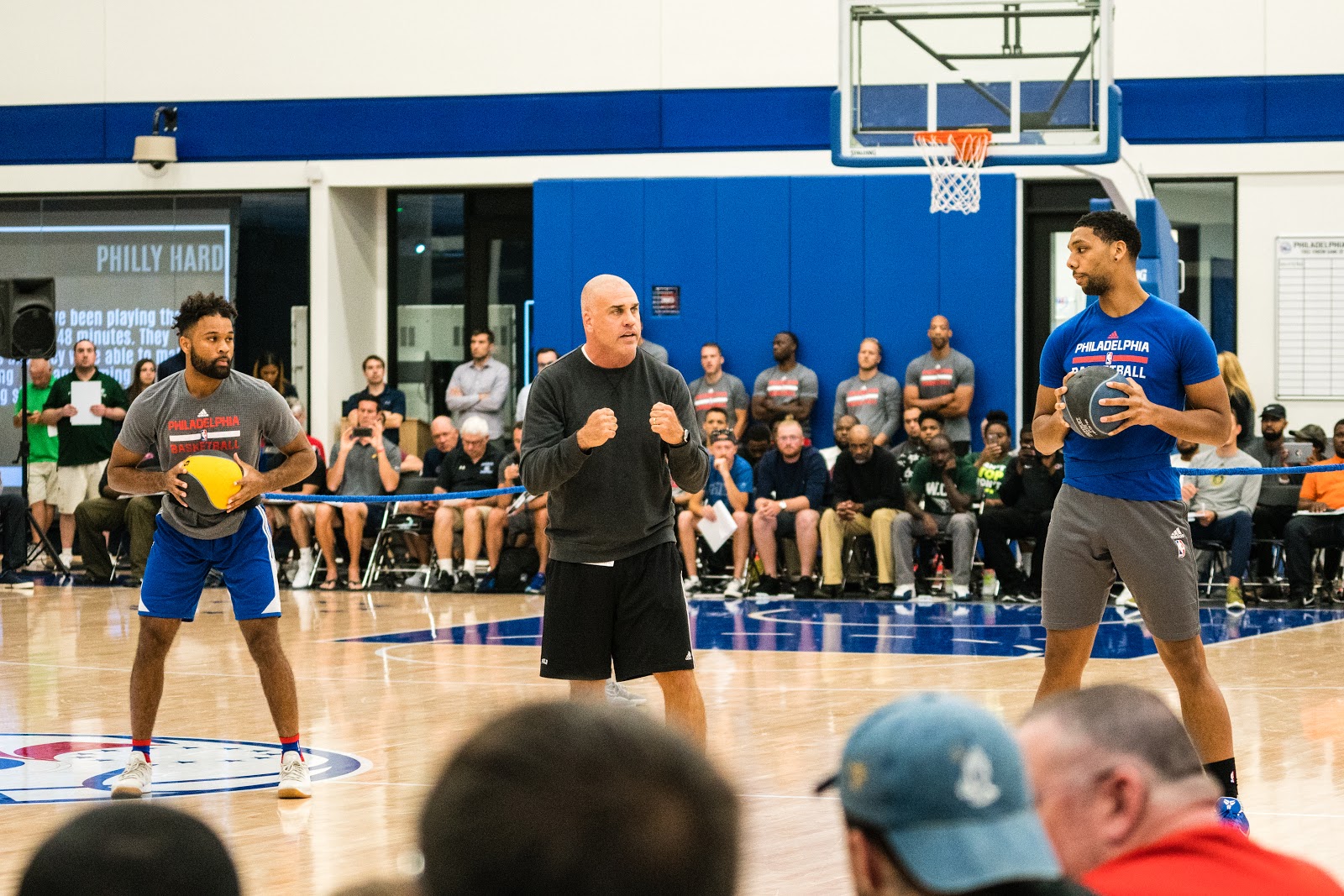 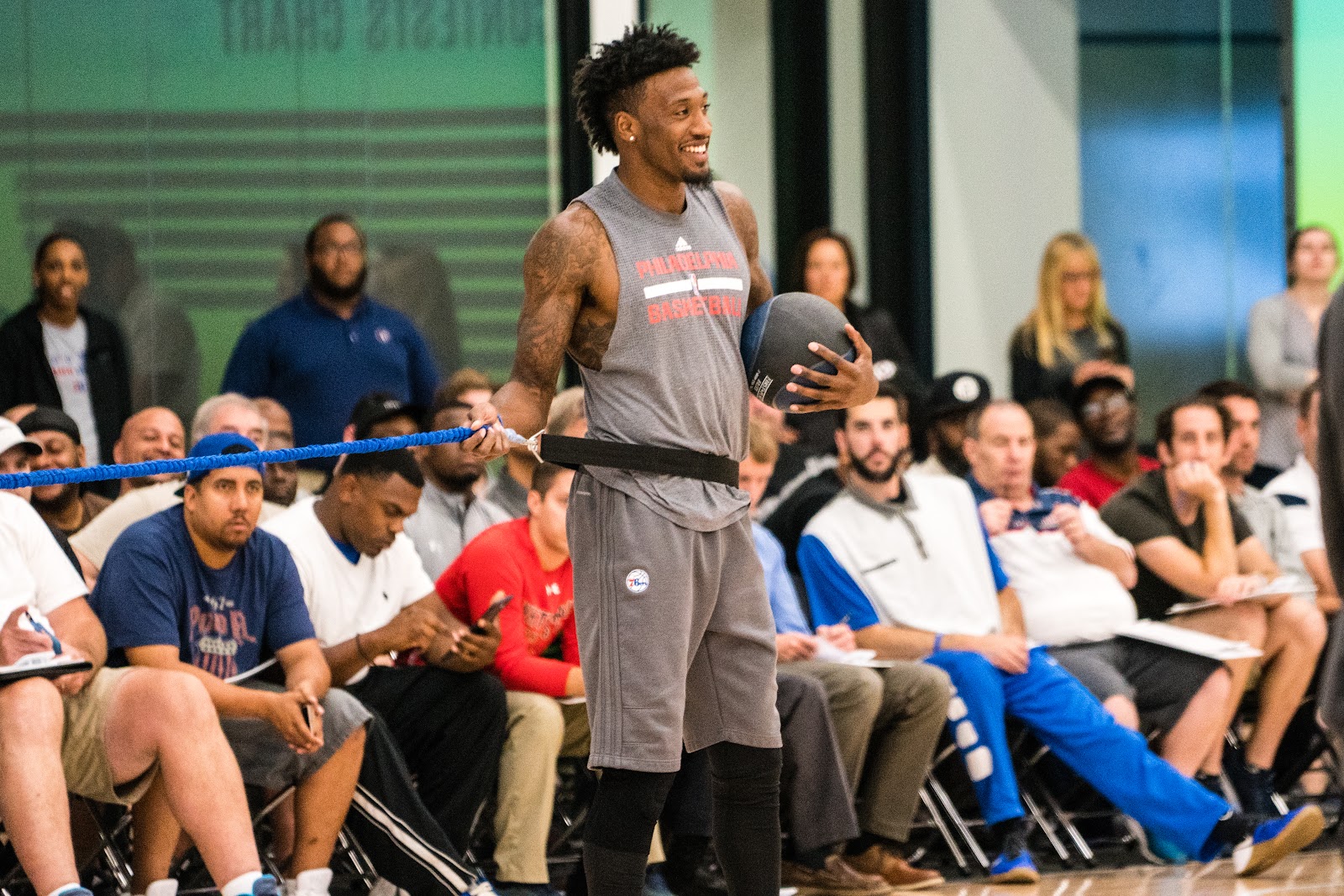 Watching Brown run Tuesday’s proceedings, it was plain to see and hear that he continues to go about his business with the same, grounded approach and outlook that he brought with him to Philadelphia four years ago. As he told Tuesday’s crowd, he’s a man of relatively modest beginnings, having grown up the son of two teachers in a blue collar New England town. The focus remains “trying to get things right.” 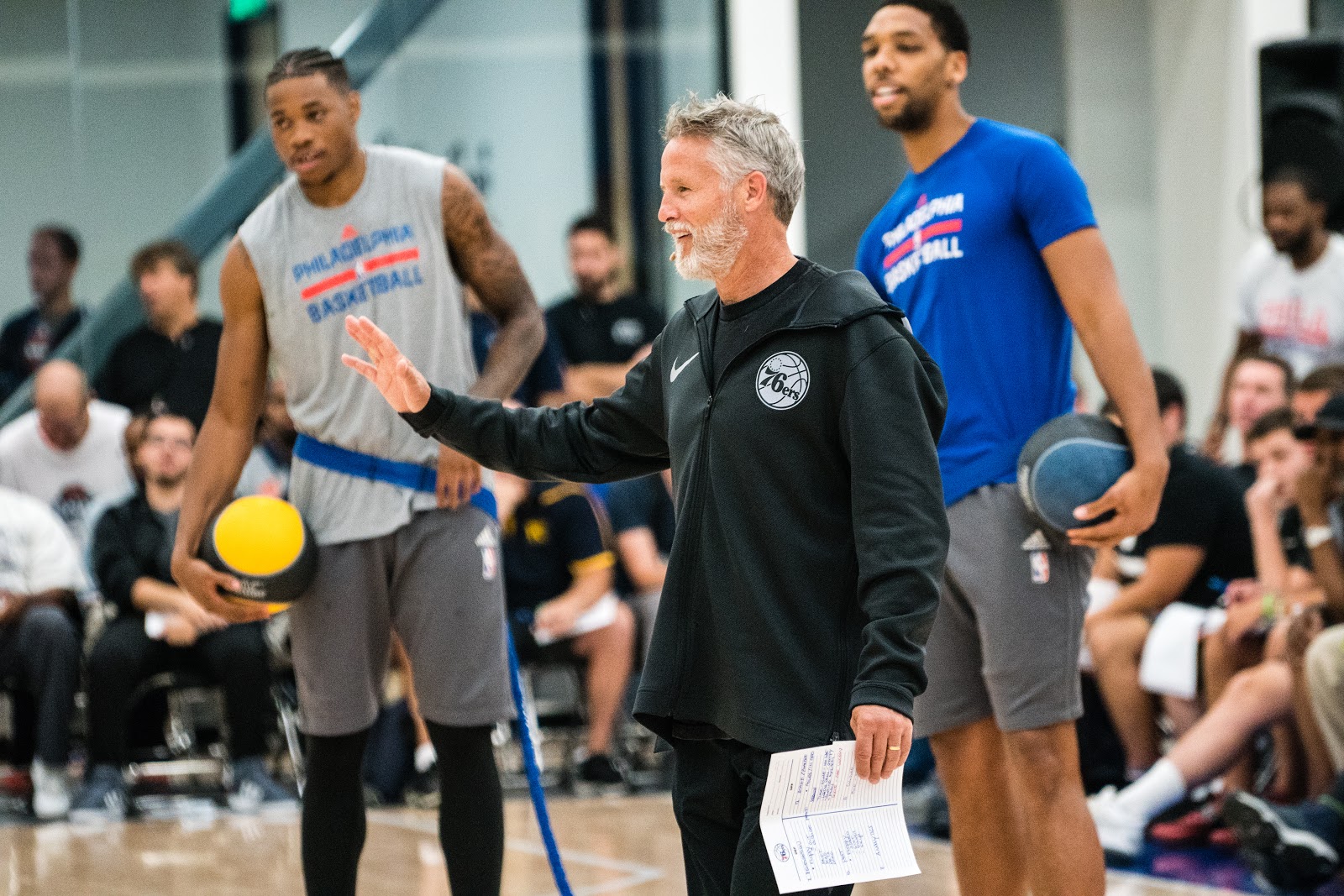 “We’ve worked incredibly hard, as everybody knows, to grow a culture, how we do things,” said Brown.

Even as the resources around him have improved dramatically. The proof lies in the Sixers’ talent base, the club’s training complex, and the facility’s ability to draw players back for voluntary off-season workouts, such as the ones that started up again last week.

“It’s just a really high-energy building, it should be,” said Brown. “We’ve got a professional chef, game room, strength and conditioning, dry and wet areas, video rooms, and coaches here. It’s an area that we thought we could make great strides once we had it, and get them in here where they want to come, and come they do. It’s been a wonderful September.”

Come the end of the month, he’ll be plying his trade towards positioning the Sixers to win more games. Tuesday, though, the mission was simply giving back.